Uto Peak's SW ridge is the little brother to Sir Donald's more famous NW ridge. It starts in the same place and it's very similar climbing on sound, blocky quartzite, but only half as long (400m ascent from the col). It's a good alternative if the weather is dubious, or for novice alpinists who're not sure about getting up and down Sir Donald in a day.

The climb stays close to the ridge crest or slightly to its left. It's mostly 3rd- and 4th-class scrambling with a few low 5th-class steps. The guidebooks call it "5.1" but it's old-fashioned 5.1.

Start from the Uto-Sir Donald col. Climb up the ridge. Stop at the summit.

There are a couple of ways to descend:

1. Reverse the route. There are several rap stations, but as of 2016 the slings were quite faded. The main advantage of descending this way is if you've left anything at the Uto-Sir Donald col. Beware of the rodents of unusual size if you leave anything at the col.

2. Most people will find it easier to descend Uto's NW ridge. It's almost all 3rd class or easier. Stay on the ridge crest with occasional detours to the left (facing down). There are one or two steeper steps where it's possible to rappel, but the downclimbing is nowhere harder than 4th class if you take the easiest line. When you reach the Uto-Avalanche col turn left (south) and head down a gully (snow or loose scree) towards the Sir Donald bivouac. Some people have headed down too soon and found themselves in a gully that cliffs out. From the top of the correct gully you can see the whole way down.

If you're not a confident 5.7 leader then bring a rope and a light rack. In early season an ice-axe may be useful for snow slopes on the approach and descent. 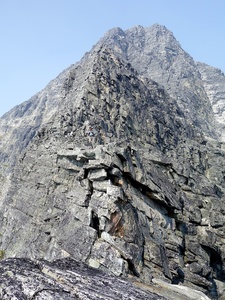 Looking up the SW Ridge from the Uto-Sir Donald… 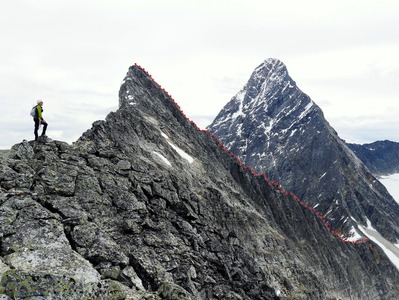 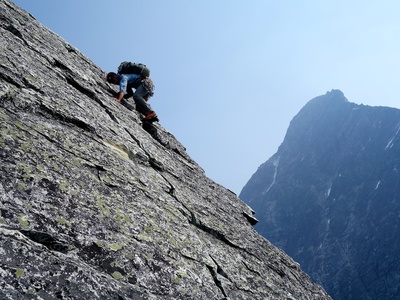 On the SW Ridge of Uto. Sir Donald in distance. 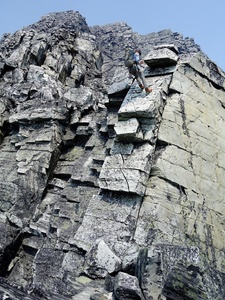 Rappelling a steeper section on the SW Ridge.