There is a pitch Royal and I did literally inside the mountain (Foolish Man) that probably was never done, I will describe that later on.

Just to the right of Purblind Pillar is the gigantic gaping chimney system which is accessed via the same approach as Fleeting Boldness. (Foolish Woman) Up some class 4 ramps on good rock to the terrace, then find your way easily to the base of the chimney system. The 4th Class climbing is beautiful, with fantastic varnished huecos on both walls. Some might want a rope as bulges and some smears would cause a bad fall. Belay as the chimney gets shorter and the angle steepens, just before it turns to the right. 200+- ft

p2 Preparing for an easy squeeze and the unexpected, pop through and go right, leading up a low angle beautiful varnished pocketed face, and then an ever hardening well protected chimney. Belay at a boulder with a thread. Hint: clip rope directly to the thumb loops of big cams here, or the rope will reorient the cams. 5.8- 110 ft

Scramble up into the cathedral-style room, look back outside and the big boulder and corner above your thread and to the right is where the route continues. Inside the mountain behind you is another pitch not part of the route.

P3 after a small bulge, a fun corner with hidden holds brings you to another varnished slab. 5.7 100ft

P4 A slippery looking slab with a corner that widens into a chimney. A short section up to where the chimneys pinches off and you get gear again. A horozontal .75 protects the face moves up to the tree on the pocketed slab. If you clip the fixed hex you've gone too far up the corner. Kind of scary looking climbing above the slab, but short. After going up the face and slinging the tree, it's all scrambling from here to the top. My least favorite top out of any route on the wall. 200 +- ft 5.8

Back to the hidden pitch....

After pitch two, if you head up into the big room, climb a short 10 ft chimney to another ledge. Up the overhanging OW/chimney (Foolish Man) with no bottom up and with hard squeeze moves up to a talus ramp in a chimney. As the ramp dissipates and the chimney is vertical and with few weaknesses, continue up and eventually towards the outside of the chimney to a big chockstone and thread. A single 60 or 70 will require rapping off a deadman anchor, and double ropes would get you down ok. You can see the actual route outside the top of the chimney, but getting there is kind of impossible without some shenanigans. A strenuous and scary lead. 5.9

If it wasn't for the crappy top out this route would be bad ass. The first 4th class pitch will have you telling your partner how awesome it is, and they will describe that they cannot understand you and to repeat yourself.... The enclosed nature of the route was great. More squeeze chimneys than wide chimneys, and the other pitches are pretty cool as well. Great rock!

To the right of Purblind Pillar, accessed by scrambling up to terrace. Walk off standard AFW descent. You can bail cleanly from the big chockstone above P2 with a single 60 and some down climbing, very easy.

Single rack to 7" fixed gear includes some threads, a fixed hex on the last pitch that is too far left. Don’t clip the hex. Not sure I ever used nuts, bring small cams. 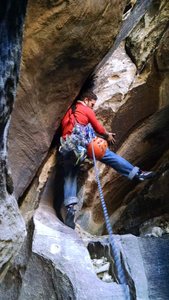 Hidden pitch. Trying to figure out the moves... 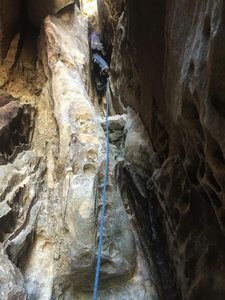 Leading p2 just before the turn. 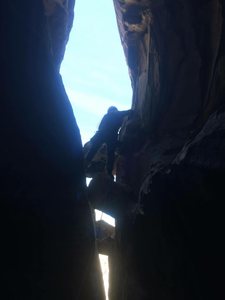 Moving belay to top of chockstone for p3 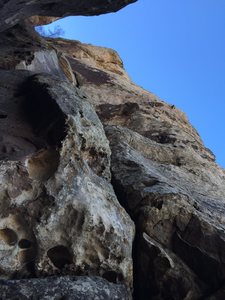 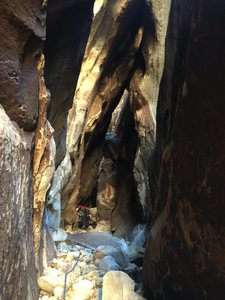 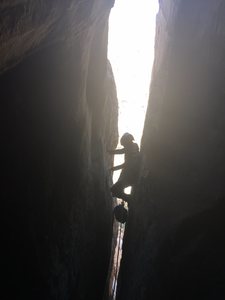 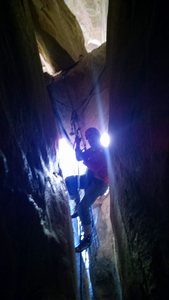 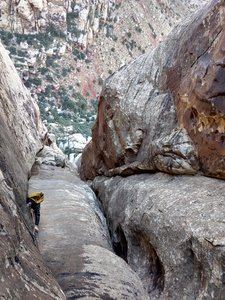 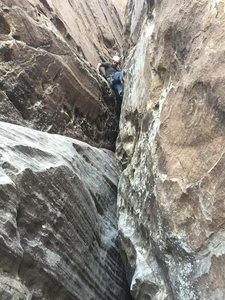 The first pitch scramble. May or may not need a… 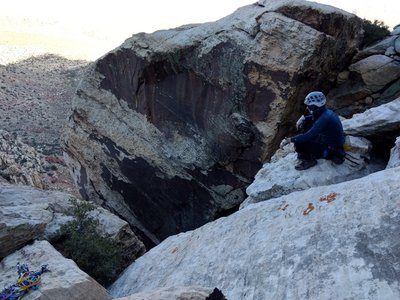 Hanging out at the end before going up and taki… 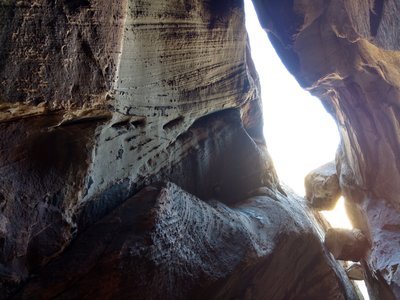 Its a really beautiful area. 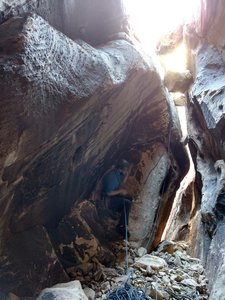 The chockstone chimney area. Randy is above som…