I have no idea if it was the first technical ice done on the slab.

The ice was unusually thick that year, and Ed always had a discriminating eye. So after the first rap or two down the low-angle left-side-gully (some folk, even then, just down climbed it) we traversed climber's left along the snowy and tree ledge with the huge overhang above.,

I'm not sure if Ed did this in one pitch or two, but the pine tree played an important role, either as a belay or as a good protection point. Remember, 150 ft ropes were "long" in the mid-1970's.

Way better than average for this slab. 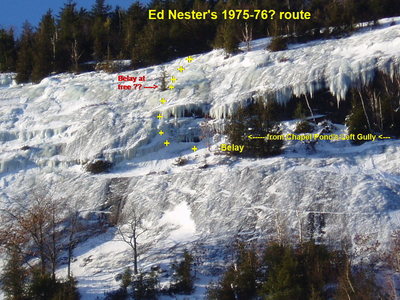 "Ed's Route" on upper right side of Emperor Sla…