Climb past three bolts in an ever-steepening shallow corner system. After clipping the forth bolt perform a series of tenuous stemming moves to reach a hidden jug below an overhang. As one reaches through the overhang to some big holds and gain a balancey stance on the lip before clipping the fifth bolt. You cannot reach the fifth bolt until you commit to the moves to surpass the overhang (exposed). Climb past another bolt on a face which is slightly less than vertical, clipping a 6th bolt before climbing to the shared anchor of Utopia 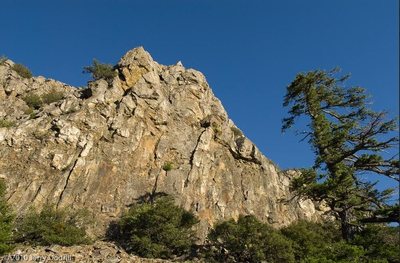