[Quoted from Mountain Project] From the middle section of Hidden Valley, West Face Gully is prominent in the center of the mountain face. Most common route is to go straight up the steep chute that begins at ~10,000' in the upper section of the valley. Snow angle here is 40-45 degrees and lasts for approximately 300'. Once the top of the chute is reached, the gully turns slightly to the right and continues straight up the face. From here until the upper section of the face / Fang Rock (~12,500'), snow angle is sustained and less steep (30-35 degrees).

Variation: To avoid climbing the steep chute at the beginning of the route, you can stay on the right side of it and climb into the 'bowl' between Casaval Ridge and the ridge that separates it from West Face Gully. From here you can traverse this ridge into West Face Gully at ~11,000-11,200'. Depending on the place where you traverse the ridge, snow can be angled at 40-50 degrees, but only for a short while (50-100').

Gully steepens up to 35-40 degrees as it approaches obvious red outcrops of Fang Rock (~12,500'). Depending on the time of the year, top of the gully can be covered with or free of snow. If snow is there, go straight up to the top of the face. If snow in the upper section of the gully has melted, continue on carefully through the talus and avoid walking directly above the snow field. Talus is VERY LOOSE in there and one can accidentally drop rocks on other parties in the gully! This will take you to the saddle on the top of the face at ~13,300'. Good place to rest and take a break before the final summit push!

From the top of the face, you should see the upper section of Whitney Glacier, Misery Hill and the summit. From here, continue climbing the ridge on the right side, and cross Whitney Glacier (no crevasses here as far as I know) to get to the bottom of Misery Hill. It will involve some downclimbing (100-200'). Snow on this side of Misery Hill is melting by June/early July. You can continue straight up the Misery Hill (cross-country) or go around its base to the right until you reach more established trail from the Avalanche Gulch route.
On the top of Misery Hill, this route is merging with the one from Avalanche Gulch and continues to the summit through the summit plateau.

Approach to this route begins at the Bunny Flat parking lot (6,800'). Continue for 2 miles to Horse Camp (7,800'). Immediately after Horse Camp, the trail splits. Take the left turn towards Hidden Valley. There is a sign that marks this intersection behind the Horse Camp cabin, but early in the season it can be buried under snow. If you miss this turn, trail will take you to the Avalanche Gulch route.
After taking the left turn, trail will continue for 1.5 miles and traverse the West side of the mountain until it reaches Hidden Valley (9,200'). Trail conditions are average to good with some loose talus along the way. You may be required to traverse several snow fields angled at 20-40 degrees. Usually this snow melts by early August. It is much easier to cross these snow fields early in the day before snow gets too soft.
Best place to camp is in the middle of Hidden Valley. When Valley is fully covered with snow (usually until late July-early August)), look for last rock outcrops before the slope angle starts increasing towards the base of the West face. Later in the season, you should be able to find several well-protected tent spots on the rocky ground.

It is highly recommended to start on this route very early in the day when snow is firm and icy. Crampons and ice axe are necessary for the ascent . Snow in the gully rarely melts unless it is a very dry and hot summer. If the gully is free of snow, this route is not recommended as it will be filled with steep and nasty talus.
Most of the Shasta guide books recommend the rope for the upper headwall, but I did not find it necessary. 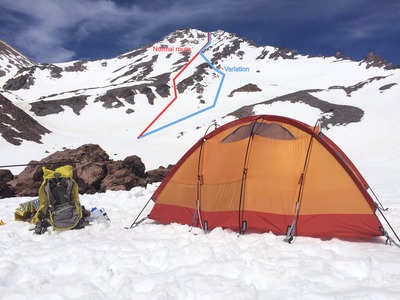