Start up past a right-slanting diagonal to gain a thin flake, then up along the right side of the latter, until arriving at the start of the right-slanting fingertip traverse. Good thin gear up til then. Some marginal thin gear across the traverse. Then a vertical handcrack to the top. Anchor bolts atop adjacent Two Guys On The Wrong Climb to climber's left. FTOJ is on the north face of the northern most section of Pep Boys Crag, visible from the Playhouse/Cathouse pullout. (Note: the route as drawn in Joshua Tree West starts further to climber's right, to somehow gain an upper leftward arch marked by an unprotectable hairline seam over lichen covered coarse grains that looks untraveled, which connects only to the midpoint of the above described fingertip traverse, as in one would end up doing only the latter half of that traverse. Probably mis-drawn in that 2006 book.)

Anchor bolts atop Two Guys On The Wrong Climb no longer equipped for rap, so a roundabout walkoff down backside first and then toward the road.

Thin to 2", gear anchor or traverse to climber's left to anchor bolts atop adjacent Two Guys On The Wrong Climb. 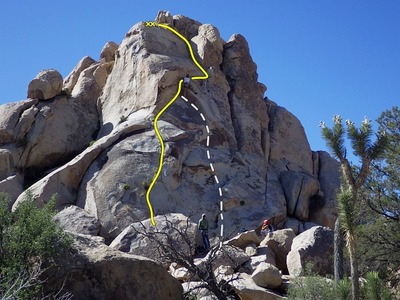 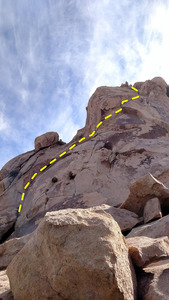 The Vogel Guide (1992) describes climbing the a…

More About Fingertip Traverse Of Josh