What madness is this that possesses a man to hang from rock? Not small rocks, mind you. Large cliffs that reach for the sky. Black, gray, orange cliffs made from sandstone. Sand! Doesn't he know that one wrong move, one slice of the rope, one failure of his harness or anchors could spell his demise? Not to mention what could go wrong if his belayer is not up to snuff. Why, today I looked up to see a roof of rock about 40 feet above with a crack splitting across it for damn near 20 feet. And guess what else I saw? A man! Arms and legs buried deep in the crack, suspended upside down like a sloth to a branch. Albeit with more agility and strength. Building his way to the other side, where he disappeared around the edge. After a while there was some chatter between the climber and belayer, something about easy moves on the most featured plates and a second pitch up the right. The line was pulled tight. "On belay" from above. I took a step toward the dihedral and readied myself to follow. This is madness, perhaps, but it is of the type which strengthens a man's body and soul. That rejects the notions and rules that have no good place in his mind. I reject what madness possesses a man to live a life in fear, never once embracing the animal he tries not to be. I respect such decisions, but the world is mine to do with as I choose... "Climbing!"

From Spider Rain, downhill at corner of wall. 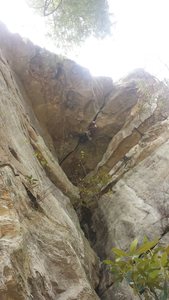 More About What Madness