Routes in Via Ferrata

This Ferrata is considered difficult and exposed. It is also stunningly pretty. It ascents the SW face of Punta Fanes Sud which is one of the towers extending along the Cresta di Fanes – the ridge of mountains that extends north from the top of the Falzarego cable car and which contains numerous classic traditional climbs along its western faces. From the start of the route you traverse leftwards on a steep/overhanging wall then head straight up for some distance to a ledge on top of an arête (where many photos are taken). From there the route goes up right (not along the left cable) then steeply up more slabs and a crack to the summit. The total cable is 300-400 meters in distance.

Parking: Drive to Passo Falzarego and park in the large car park at the top.
Approach: The easiest start is to take the Funivia del Lagazuoi cable car up to the Lagazuoi refuge (or hike up path 402 for 2 hours, or hike up the Lagazuoi tunnels, or climb an easy route). Once at the Refuge you can take one of two paths to the start depending on the snow depth. If little snow exists the most direct path is descending down the path to Forcella del Lagazuoi (right out the door, then north down the zig-zags to the fork in the path at the pass area.) From here head straight north on the West side of the ridgeline heading down, then eventually back up to the next pass (Forcella Granda) stopping at the Bivacco della Chiesa to gear up and start the route. If there is a lot of snow, an alternate approach is to again drop down the initial switch backs, but at that point stay on the large path heading east towards Tofana di Rozes, across some meadows to the next pass (Forcella Travenanzes) then turn north on path 20b walking along the east side of the ridgeline in a valley that then ascends another pass (Forcella Gasser Depot). At this point continue north and begin hiking up the hill towards the top of the ridgeline/pass (Forcella Granda). Once you hit that pass, you will be at Bivacco della Chiesa and the start of the route.
Descent: From the summit head north along the summit and descend the steep cable on the NE face and wrapping back around the east face. Watch carefully where you are going by looking over the east side occasionally – you need to pick up a notch and descend some steep scree (or snow fields) on the east face heading back south to path 20b. Pick your way down and get on the path described above relating to the alternate approach. Once you arrive at Forcella Travenanzes you can just hike down the path (402) to the bottom. You can also go back up and take the cable car down, or descend the Lagazuoi tunnel Ferrata, or hike further east and descend Ferrata delgi Alpini. 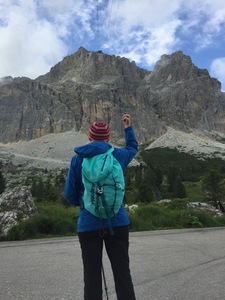 My wife cursing the tram that runs only until 1… 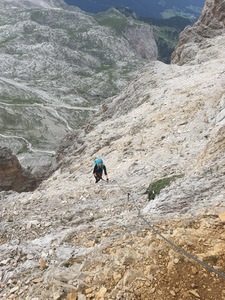 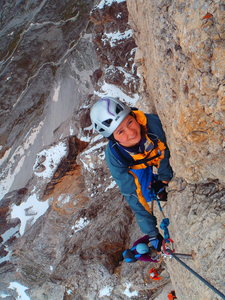 Steep in some areas - best to be a climber, not… 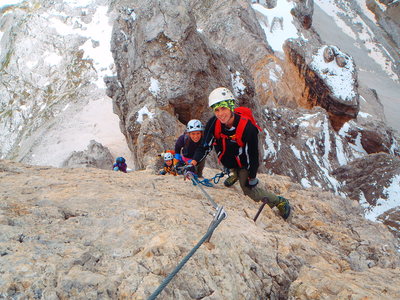 The upper slab section above the terrace ledge. 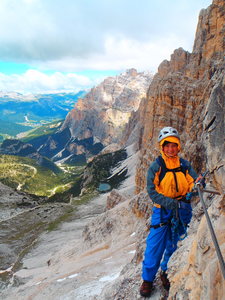 The Cresta di Fanes in the foreground, Conturin… 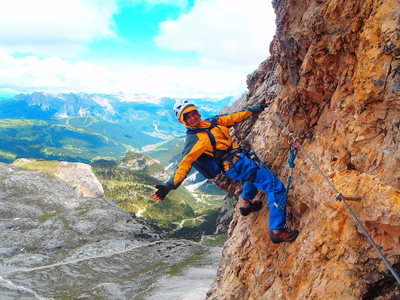