In 2011, the Ventura Family (owner of Miguel’s Pizza) purchased the land above the cliff line, and the RRGCC’s 2017 purchase of the land beneath the cliff line and the surrounding areas ensures that the Motherlode, Chocolate Factory, and southeastern end of Sore Heel are climber-owned.

The king line of the Madness Cave, this route climbs out the steepest part of the cave to the highest part of the cliff. Extended to the top of the cliff and sent by Bill Ramsey in 1999, this route was originally graded 5.13d, but upgraded after several holds broke. This is the quintessential RRG line, long and steep, but with generally pretty good holds, and no hard moves for the grade.

Starting off the small boulder, pull one of the harder moves on the route a ~V5 boulder problem on small holds. Continue up the steep wall on 5.11 jugs to a tricky sloping leftwards traverse section to gain the resting ledge. It is about mid 5.12 to here. After figuring out the sit down rest and forcing yourself to wait until fully recovered, attack the steep headwall, moving past a difficult section passing the 3rd bolt (on the headwall). A quick shake is obtained at the 6th bolt (on the headwall),with more difficult moves to gain the "beach" and the 7th bolt. Get a good shake and pull difficult moves to get off the "beach". Another shake allows some more recovery before tackling the steep mid 5.12 finishing headwall above. The last bolt is generally skipped on redpoint attempts resulting in some huge whips as climbers gun for the jugs below the chains.

Some sneaky beta allows a few additional rests, and some of the cruxes can be dumbed down with kneepads.

Center of the Madness Cave, to the left is "Flour Power" to the right is the "Madness". Starts off a boulder on a vertical section with little crimps. 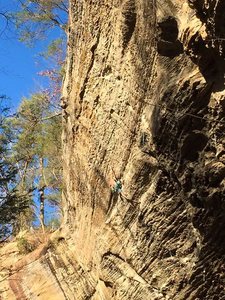 Pulling onto the final headwall. 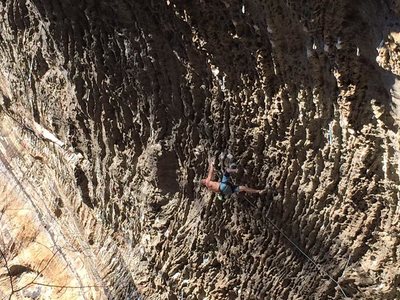 The first crux, at the third bolt on the headwall. 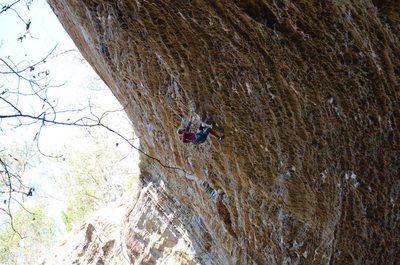 The first decent rest on the headwall, 6 bolts…