According to the most popular version of the myth of Pegasus, Athena gave Bellerophon a Golden Bridle in his sleep. The next morning he found Pegasus drinking at the Pierian Spring and used the bridle to capture, tame, and ride him. This formation, like the nearby Sphinx, has some rather untamable-looking features.

The Golden Bridle was used to tame the otherwise impassible SE Arete directly without wandering about. The grade I am not testifying to be certain of, but it is probably 5.7 to 5.8. It was soloed in approach shoes, making the grade somewhat ambiguous. A second soloist just behind on the system backed off and elected for another route after watching the crux and inquiring about it. (Edit to add, it is tricky 5.8, confirmed by a second party who roped up.) This crack/corner system is the longest crack climb I can recall encountering on an East Face route in the Flatirons, and is of excellent quality for most of its length.

To do this route, start on the South end of the East Face. Climb a few hundred feet up the south end of the east face, dodging left at an overhang as per the description in the Haas book. You will eventually come to a vertical corner system with a few obvious bulges in it, running a full 100' pitch length to a top-out of the corner. Normally the route would go to the right here onto the East Face proper, at its South edge. Instead, get into the corner (first crux) and head up a delightful thin-hands-crack with mostly good jamming... except at the cruxes. Continue up further past that for 40' to a third crux. The crack tapers to finger-sized and tops out to the right on a small ledge with finger sized gear.

From that ledge, place a bit of gear at your feet, and head up the slightly bulging head-wall on incuts and pockets (4th crux), pulling onto the upper slab on slopers and to find a belay (somewhere). You are still a solid pitch length from the top, though the rest of the climbing is inconsequential.

This climb can be approached via a 10 meter low-angle scramble up to a ledge from the South, perhaps 60 meters West and up from the East Face, skipping the early scrambling, and going directly to the crux dihedral pitch.

To descend, either head up the talus ridge West for a few hundred meters to the base of the Devil's wings and scramble off to the South, or hike down north through talus at any time. The South descent kind of sucks. I don't know about the North, as it has been a while since I did that.

The route is not hard, per se, but it is not a typical Flatiron route. In all seriousness, I don't recommend attempting to tame this route without a rope or proper shoes, at least. There are some cruxes that are sloping holds and thus insecure and most certainly not slabby. A fall would be certainly fatal unless roped.

This route climbs the Southeast face of Pegasus to a nice crack/corner system that can be seen even on the aerial photos of Googlemaps at the location: 39.956437, -105.287738.

This climb can be approached via a long pitch on the East Face, or via a 10 meter low-angle scramble up to a ledge from the South, perhaps 60 meters West and up from the East Face.

Bring gear sized from fingers to hands, with most of the climbing being thin hands. I suspect mostly green and/or tight red Camalots. The crux sections are short, and I'd say take a standard light rack with 2 each of those and you'll be OK.

A few pods and constrictions in the corner crack will take larger or smaller gear, and finger-sized is useful at the final part of the corner before the short runout on the jugs of the bulging headwall. As the last potential piece, you'll probably want it there. 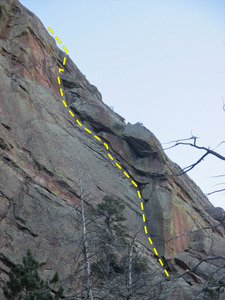 The long dihedral pitch as seen from the talus… 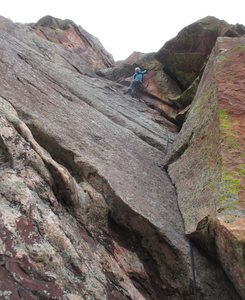 Sonia Buckley takes a ride on Pegasus via 'The…

More About The Golden Bridle