With the possible exception of the SE Spur this is the best climb on Mt Washington. For High Cascade in Oregon this route has excellent rock, maybe the best on any mountain in Oregon. But it is still poor compared to the Sierras or North Cascade. I have climbed this route at least four times. The last time I climbed it, my climb partner, Paige and I had a very fun and rewarding climb.

Route: With the exceptions of the starting dihedral and a V chimney on the summit massive there are multiple of variations to each pitch. The climb can be divided into three distinct parts:

Part 1: Two or three pitches of reasonable climbing up to 5.8.
First is a short pitch to get to the notch. There are three ways of doing this, two from the north side and one on the south side.
1. North side rope drag 5.4. From the alcove climb the easy rock to the right and circle around to the notch.
2. North side direct 5.7/8. From the alcove climb short vertical cracks leading slightly right of the notch.
3. From the south side 4th class slabs leads to the notch.
Once at the notch traverse on the south side for about 10 to 15 feet to a dihedral. At 5.8 the dihedral may be the crux of the climb. After the dihedral, easy climbing leads up to the crest of the ridge. Near the top enter a low angle shallow gully. Climb the simple low angle gully to its top. The gully is the steepest section of the loose Cascade Dinner Plates. With careful scrambling the dinner plates are not bad.

Part 2: The next 250 feet or so is easy climbing on the low angle ridge crest. This section contains more loose dinner plates, but again not dangerously so. This section ends at the base of the summit massive.

Part 3: The final section contains four or so pitches. For the most part, the rock of this section is solid and it is not until the final ridge walk do you encounter much loose rock.
About 80 feet up from the base of the summit massive is a short 20 feet V chimney. Climb the chimney. Above the chimney move left and continue up to a comfortable belay stance. From here there are many options for each pitch. None should be more than 5.7/8. About 250 feet from the summit, the route becomes easy 3rd class scramble.

Approach:
The best place to begin the approach is at the end of the road on the west side of Big Lake. Unless you are camping at one of the campsites near the end of the road, there is no parking. The closes day use parking lot is at Patjens Lakes trailhead.
From the unmarked trailhead at the end of the road hike the trail along the lakeshore passing an unmark intersection with Patjens Lakes trail. Continue on the lakeshore trail. After it leaves the shoreline there will be another unmarked trail junction, this time turn left (east). At the next unmarked junction turn left, east. Continue east past several unmarked trails from the west. In a few minutes, the trail will fork (GPS: N44° 21.929 W121° 52.163), bare right. Continue to a small clearing where there is a junction with a wide well established north-south trail (GPS: N44° 21.907 W121° 52.104). Turn south. In five minutes or so, you will reach the PCT, at the only marked intersection (N44° 21.686 W121° 52.281) on the approach.
Follow the PCT south for about a half hour until an intersection with a trail to the east (left), marked by a cairn (GPS: N44° 21.039 W121° 51.916). This is the access trail to Mt Washington. Follow the access trail for about 30 yards where the trail splits, the left trail leads to the North Ridge and the right leads to the West Ridge. Turn right. The trail will fork in several places. You have a choice to take any of the forks that leads up the scree slope to the north side starts of the West Ridge route. The scree slope is direct but tedious and tiring approach.
Better is to stay low, just below the scree slope and traverse to the lower wooded end of the West Ridge. Follow the wooded ridge east to the rock section of the ridge. Once the ridge becomes rocky bear either to left side of the rocks for the north side starts or right side for the south side start.
The north side starts are in a small alcove directly below a small notch in the ridge (GPS: N44° 19.932 W121° 50.451).

Descent: From the summit head north for about 100 feet to a chimney, down climb the chimney and continue for another 250 feet or so to the top of a single rope rap to a large notch. (There may be single rope rappel stations from the summit to the notch.) From the notch there are two options. Drop down the scree slope to the west until you reach the PCT or take a slightly longer in time by follow the North Ridge approach down.

One 60m rope, a small rack containing one set of Camalot .3 to 4, doubles in 1, 2, and a second 4 may be advised for those who want to sew it up. Stoppers are optional but if you want one set of medium size stoppers will suffice. 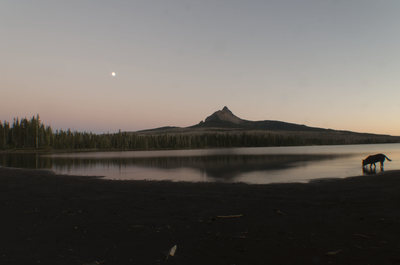 Mt.Washington at sunset from Big Lake 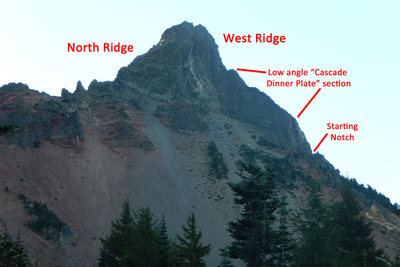 Mt Washington from the North/Northwest 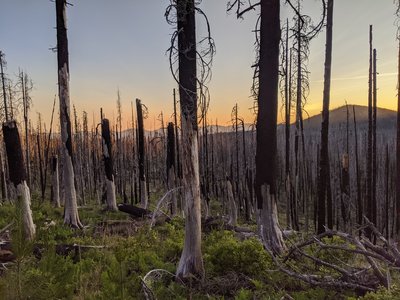 not far from start /end of hike about 1 mile fr… 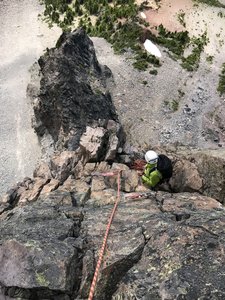 Looking down from the headwall. 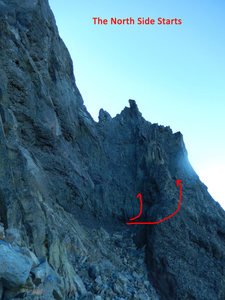 Start in a small alcove below the notch. Either… 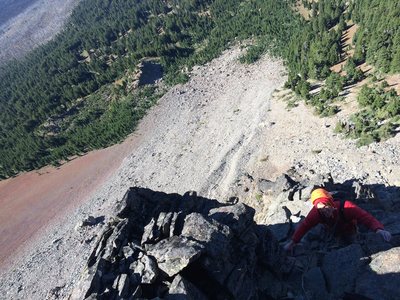 Getting into the dinner plate pitch. 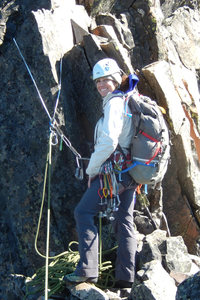 Paige at a belay station

leading up the dinner plate pitch. 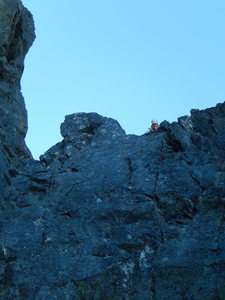 Looking up from the North side start to the notch. 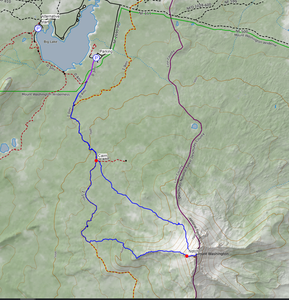 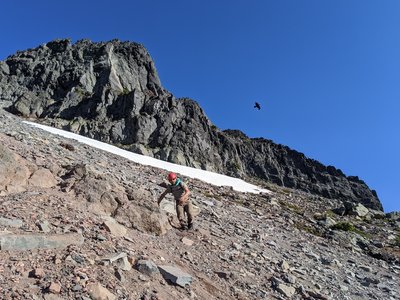 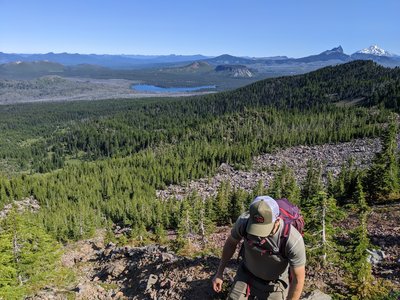 starting to gain the lower part of the ridge. s…