This classic linkup of two of Smith's best finger cracks is rarely done in its entirety, but is more than a worthy objective for those up to the task. Expect to have to make some 5.10 moves above pretty small gear in soft rock.

Pitch 1: The West Face. Either french free up the right hand bolt ladder until you can climb the pinned out tips crack or start via Sheer Trickery to the left at '12c.' Sheer Trickery is stout. Once in the crack, start by pulling through some easier moves on slightly suspect gear. As the gear improves, the difficulty increases, culminating in a punchy sequence of finger and tips locks on an immaculate, slabby splitter. Once above the crux, continue up a shallow off-set with less than stellar rock quality past some bolts.

After clipping the second bolt you have a choice: the Watts guide recommends climbing straight up the bolts to the large ledge (the traditional West Face anchor) and then beginning the second pitch by climbing up and left on bolts around the arete to access the North Face crack. This is not your best choice as the bolts are old, the leader will be out of sight on the second pitch, and your rope is running over the arete. A better alternative is to clip the second bolt after the offset with a long sling and traverse left via thin edging to the arete. Once established on the arete, you can clip a bolt and are poised to balance up a slightly licheny slab directly below the North Face anchor.

Pitch 2: If you went left early, simply climb the North Face as is described elsewhere on here. If you went straight up to the West Face ledge, climb past four older bolts up and left on the arete until you can step around to access the North Face crack. As has been said, this pitch is long and pumpy. No move is really that hard, but it feels endless. In terms of pro, there are two ways to look at this pitch: You can protect with bomber gear every 10-20' (standard Smith Rock bolt spacing) or you can try and fiddle in thinner/more marginal gear in addition to/between the good placements. It's easy to burn a lot of energy trying to protect this pitch.
60m, 12a

Pitch 3: From the West Face Cave, climb on bolts through very steep terrain out of the cave. This is the 3rd pitch of Monkey Space. If the second comes off in the wrong spot, they might not be able to get back to the wall. Plan accordingly.
25m, 11b

Descent: It's possible to rappel from the two bolt anchor on the right side of the floor of the Mouth (just below the beginning of the 'panic point pitch') back to the base of the route with a single 70m. The rope pull is hard, but doable and facilitates rapping with a single. As of late September, it was equipped with two quick links, but could use two more. If I make it back up there, I'll fix it up.

The route starts on the left end of the West Face basically on the main hiking trail. Look for the elegant hanging splitter with two bolt lines below it.

Gear to 1.5", heavy on the finger-less than tips sizes. Off set stoppers and RPs should be considered mandatory. 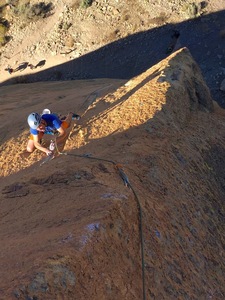 The top of the first pitch showing where to ste…