Ascend an awful, steep, scree-talus slope to gain the upper basin below Mears' north face. Aim for the obvious break in the large cliff line to the west, and climb steep snow up past it.

Once above the cliff line, traverse up and right into a steepening and narrowing couloir system, some low angle ice may begin here. The couloir will bend hard left and become very inset into the face. Several near vertical WI3/M3 steps mark the cruxes of this couloir, and do not be enticed into following other chutes that branch off from the main couloir. After 500' or so, the couloir will end with a short, steep dihedral (M4?) and put you onto a large snow slope running horizontally across the middle of Mears' North Face. It's a snow/ice route, so the difficulty is dictated by conditions; it is probably easier early season with fuller coverage than when we did it.

Traverse the snow climber's left, passing above a small gendarme, to a wide, steep couloir, and continue up this couloir (300'). At the crest of this couloir, traverse right into a final snowy couloir that ends at the notch between Mears' twin summits.

Descend east of Mears' summit down the ridge line towards the saddle with Wolcott. Make sure to continue past the small bump in the ridge to the true saddle low point, and then descend steep snow to the basin below. We descended before the small bump and had to downclimb horrible, rotten 5.6 and melting WI3.

From Ridgway, drive up Dallas Divide, and turn left on CR 9 up West Dallas Creek. Follow CR 9 to Box Factory Park. From the parking lot, follow West Dallas Creek south for 3 miles (no trail) to the base of Mears Peak. Camping is sparse, but a few decent spots are present before the scree fields.

Very light rack, if at all: a few screws, set of stoppers - it's all comfort level. We brought gear but ended up soloing because the ice was melting and too thin for gear and the rock was poor. 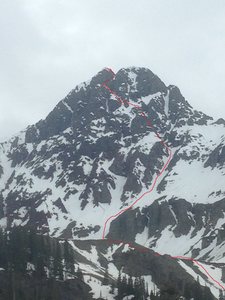