NOTE: This is not the Maroon Bells traverse and most ticks are likely incorrect. Also, overbearing MP admins should really stop ghost editing things they have no business editing.

I am doing a disservice to this site by adding the Moron's Bells Traverse, otherwise called the Megamoronal Traverse. Let's be honest. It is quite possibly the most idiotic chossfest on here.

Why am I adding it? Quite simply, because some of you are idiots. What's better than the Red, Rugged, and Rotten Cocktail for a full 20 miles and 12,000 feet of gain, constantly dodging loose rock and yarding off widow makers above the abyss? Not much.

Unfortunately, and I don't mean to be rude, but you probably aren't capable of doing this route. To be somewhat candid. It's too long, too loose, too pointless, too complicated, and so forth, but here it is, for the moronically inclined:

The goal of the traverse is to run the ridge, tagging the points >13K feet surrounding Minnehaha Gulch and West Maroon Creek, starting at Buckskin Pass and ending at Pyramid. Yes, the ridge goes with some high bypassing, and for those who THINK they're in shape enough to attempt this, it goes without rope. In a day would be most impressive.

The exact start and end can be modified, so long as you run the entire ridge between those two points. Also some may choose to start in Crested Butte, climb the eastern half first and then the western half, with a gear stash along the route. It doesn't matter; whatever you choose is likely the wrong decision, since you shouldn't be there in the first place.

The logical starting place is Maroon Lake, though one attempt started outside of Crested Butte.

The western half is referred to as the Megamaroonal Traverse. The eastern half is the Megamidal. A smart person, which those attempting this route most certainly are not, would scout each of those routes first to even have a chance of doing the full Moron's in a day.

The crux of the Megamaroonal section is Sleeping Sexton to the Gunsight prior to North Maroon. The key is to find a good ledge - generally on the W side - bypassing cliffs on the ridge. One should be able to stay fairly close to the ridge. The downclimbing is tricky, perhaps 5.easy for the most savy route-finders. The North Maroon to Maroon downclimb is much easier and cleaner in comparison. Watch out for the more dangerous choss between Maroon and Belleview.

The 5.4 crux of the Megamidal is Thunder Pyramid to Pyramid, a rather exposed chimney system on the east side of the ridge. Other than that, expect some rather intense route-finding and numerous sections of exposed 3rd, 4th, and low 5th scrambling. Describing the route is near impossible, and the route should be reserved for confident and experienced terrain navigators. Luckily, there are numerous bail spots, and it would behoove you to know where they are, since you're likely to use one.

Once completed with the traverse, pat yourself on the back and realize nobody will ever care, much less understand, what you have accomplished, but I do, and I say congratulations, you're a complete moron.

A valiant attempt at the Megamoronal (submitted as Moron's Bells), though it skips the crux northern third of the Megamaroonal, is:

I will say one good thing about this sufferfest. It is one of the most beautiful, unique, and interesting traverses in the world. Ad caveat: in its own way.

It is on the Maroon Bells. 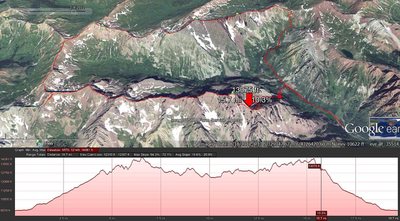