Routes in 6. The Tower Wall

Lots of interesting thoughtful low class 5 moves in a special rock situation. Too bad that difficulty level does not extend all the way to the bottom on the main Tower Wall ledge.

Reach the Start: Could join this route a bit higher than its bottom starting ledge, by first climbing the lower part of the Access Scramble route, then traversing Left to the arete. More interesting might be to start from Sunny Picnics area using Mushroom block (on a rope belay) to join the Access Scramble route - see the Mystical Mushroom Tour route.
Or could reach it by traversing right from the Red Knob route -- See the route In & Out .

The starting ledge could be reached by rappeling in from the top of the cliff (perhaps also using the Manticore Face tree anchor below the top).
Or by climbing up the (much more difficult) Manticore Dihedral route (or perhaps the Picnics Dihedral route).
Less-strong climbers possibly could be enabled to climb the Manticore Dihedral with a lower requirement of strength and technique -- if a stronger Trad Lead climber attaches an etrier / aid ladder to one or more pieces of Trad protection placed in the dihedral (or the etrier could be placed on rappel).

Route: Starting 20 feet off the ground from the ledge on the arete, go up to another ledge, and another. Diagonal right a few feet to temporarily avoid the crest of the arete, soon back Left across the crest to an interesting crack by means of a tricky step on sloping rock. Up that crack, then slab footwork to a tree anchor (nice for top-roping other routes), or to the top of the cliff.

. . . (Lots of vegetation on this rock as of 2015. Be prepared when climbing to navigate around protruding trees and branches, and dealing with holds slippery with grass, lichen, moss, dirt).

The far right edge of the Tower Wall, about 25 feet Right of the Dead Tree Dihedral.
But this route starts up on a ledge (just below some bushes) 20 feet above the main Tower Wall base ledge, so need to use a thoughtful strategy to get up to the start - (see above under "Reach the Start").

Lead: Protection for trad Lead is mostly small and medium-small cams and stoppers. The direct Variation about half-way up is not well-protected.

Top-Rope: Top anchor can be set up with a static line from one (or two) trees -- might need to use two trees to handle the angle. Or control rope angle by using a sling from the tree anchor for Manticore Face: twenty to thirty feet below the top of the cliff, about ten feet climber's left (west) from the arete (requires a low class 5 move to get from the top of the cliff down to this tree, so recommend using a rope to reach it).

The rock is high-friction, so think about how to minimize rope drag for Top-Roping. If belaying from the bottom, seems like having the belayer stand below right from the Manticore Dihedral helps reduce rope friction. 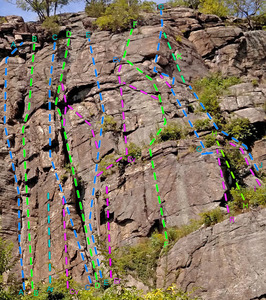 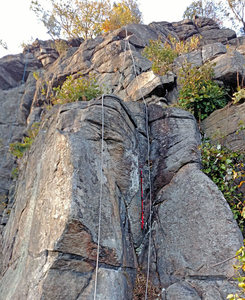 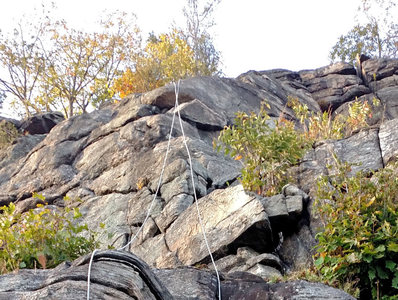