The French Direct follows a prominent snow and ice flute in the middle of Alpamayo's iconic southwest face for 1,200 feet of sustained 60-ish degree snow and ice. It is currently the standard summit route.

The start of the climbing is little more than a stroll from camp and chances are you will have watched at least one other party on the climb since you arrived. 250 feet of moderate to steep snow deliver one to the obvious bergschrund at the bottom of the face (some teams rope up for this bit leading up to the bergschrund). Passing over the bergshrund usually poses little difficulty.

What follows is about 8 full 60m pitches of steep snow and WI2/AI2 ice. The amount of snow and ice varies depending on conditions, but in July 2015 all but the bottom two pitches were ice. It is of course possible to shorten up the pitches and do more of them, or to reduce the number required by taking full advantage of 70m ropes. The angle of the face is fairly consistent, with a gradual steepening at the top. The last pitch is the steepest, often reaching 70 degrees.

The runnel ends abruptly at the airy summit ridge. Things change up here over time, but in the 2015 season the true summit was perhaps 20 feet from the topout point and we were able to belay each other one at a time to the summit and back. This is apparently not always the case; reaching the highpoint is sometimes too dangerous of a proposition, and plenty of climbers have called it good after reaching the summit ridge. People have died falling through the corniced ridge.

To descend, rappel the route. Usually there are plenty of established anchors, but bring some pickets and v-thread material just in case.

Alpamayo is deep in the Cordillera Blanca.

Pickets and ice screws. The necessary quantity of each will depend a lot on conditions and a party's comfort level.

This is a very popular climb and chances are you will find many established anchors on the route, of both the picket and v-thread variety. It isn't trivial to spot a lot of them on the way up (especially in the dark), but they are obvious on the descent.

During the especially dry 2016 season when other popular peaks were in poor condition, heavier than usual guiding occurred on Alpamayo and fixed lines were maintained for the entire length of the route!! Climbers were using ascenders to self belay.

Heading back to camp after a successful climb. 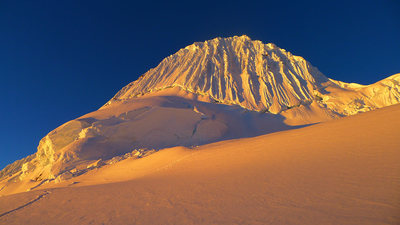 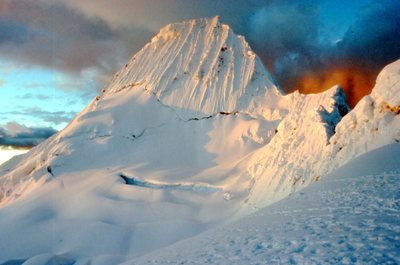 Alpamayo from the camp on the col. 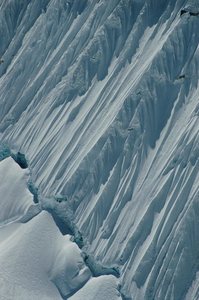 Close up of the face 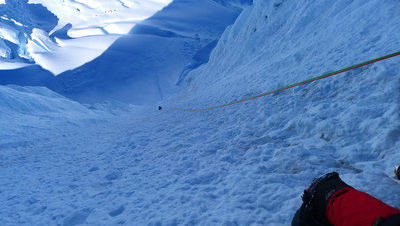 Looking down the runnel. 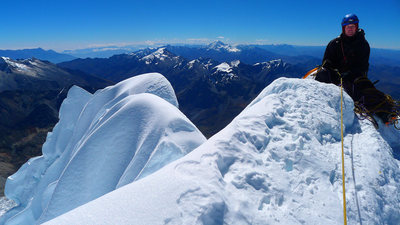 Summit belay from atop the French Direct. 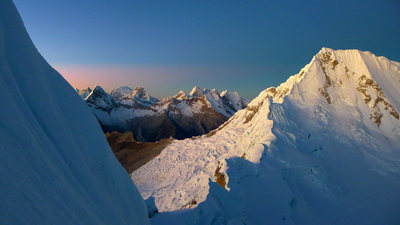 Quitaraju as seen from several pitches up the F… 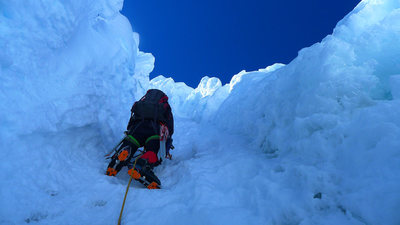 Start of the last pitch. 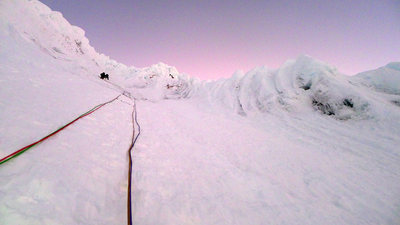 Pre-dawn on the French Direct. 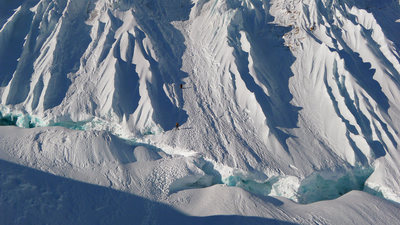 Climbers getting ready to rap over the bergschr… 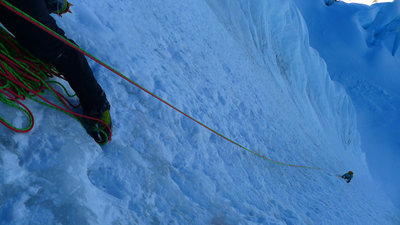 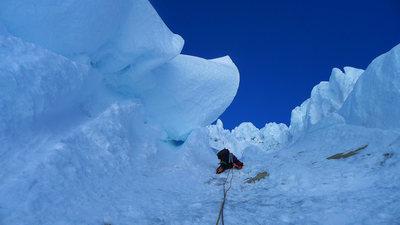