In the north cirque between Teewinot and Owen, you will see two prominent ribs coming down, the left of which is the NW ridge of Teewinot. The right comes from a small prominence on the saddle between the two mountains. Both ribs cliff out precipitously with a waterfall between them and overhanging sections. To circumvent this, carefully ascend just far enough up the couloir on the west side of the right rib to gain ledges leading around the front of the rib, after which you can cross over to the left rib.

Gain the NW ridge of Teewinot now (maybe one short roped pitch if no easier route is found) and then proceed up hundreds of feet of choss atop the ridge. Eventually you will reach a small tower. Circumvent this on the right. At this point the rock improves markedly.

Multiple options now present themselves. Move to the right side of the NW face for the original route. A more direct variation (5.7) continues up the left side of the face. Up one short pitch, a chimney to the far right of the face is also harder, with a few strenuous 5.8 moves. After two rope lengths you will reach a large grassy ledge. Here the original route moves a little left (all the way left puts you on the direct route) and then you head up for four or five pitches, eventually reaching the top. The Jackson-Ortenburger guidebook gives a few more detailed instructions, but we found them difficult to follow and simply took the most interesting seeming path, mixing the original and direct routes. With good route finding (better than ours), this can be as easy as 5.4. Be aware that the summit block does not let up, so stay frosty. Descend the East Face.

Once you reach the good rock, there is enjoyable climbing to be had, and the views of Owen and the Grand are unbeatable, but the amount of choss and bushwhacking that must be overcome reduces the appeal of the route. The views, however, are epic throughout the climb. Navigating the upper portion of the descent in the dark would be unfortunate, so move quickly.

Hike up Cascade Canyon to below the drainage coming from between Teewinot and Owen. Find a place to cross the creek and hike up the west side of the drainage (stay close to the stream near the top). Once in the cirque, proceed up the west side of the right of the two ridgelines that come down from between Teewinot and Owen. The left ridge is the NW ridge you are shooting for. An early alpine start is a must for this difficult approach.

No fixed gear spotted. Standard Teton rack to #3. Beware of loose rock since this area gets almost no traffic. 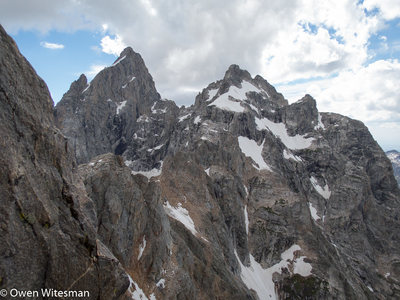 Mt. Owen and the north face of the Grand from t… 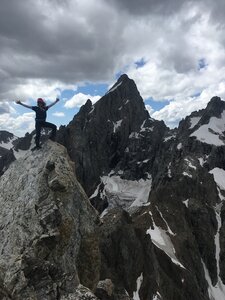 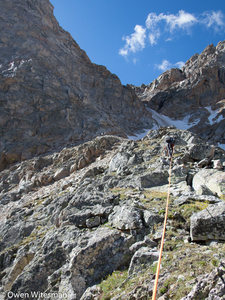 Moving up the ridge. We encountered short class… 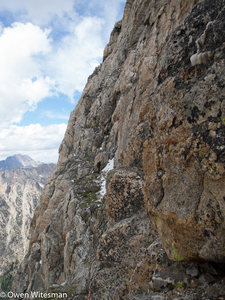 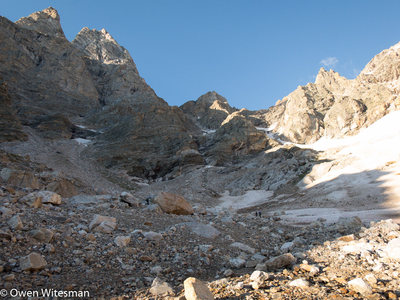 The two ribs are centered here. Go up the right… 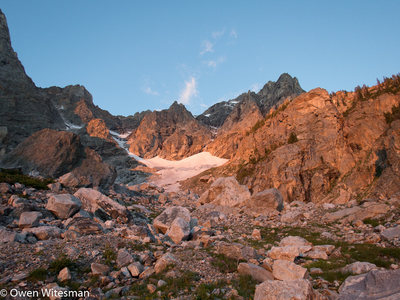 The cirque. Head up the left edge of the main s… 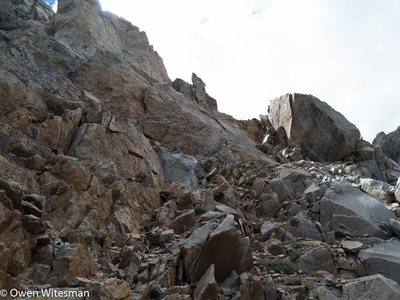 We circumvented the small tower by going throug… 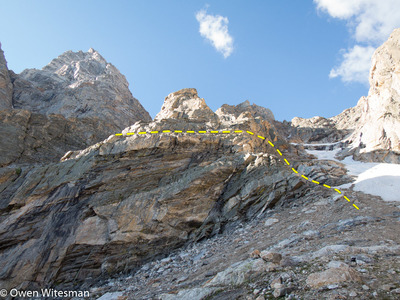 The right rib with ledges visible 2/3 of the wa… 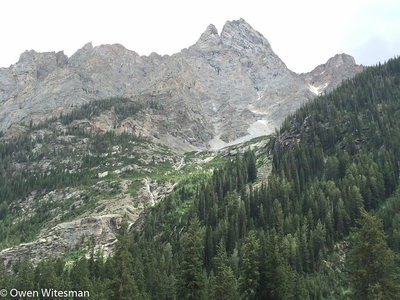