Caminando is one of the mega-classic routes at Wenden and a must-do for those climbing at the grade. It is an incredible snaking line with killer exposure and decent protection. Expect a long day out.

The route is more or less located smack dab in the middle of the wall. It is easily identified by the word, Dingo, which is written at the base.

P1 (5a/5.7): Starting at the word Dingo, climb straight up easy terrain with natural protection. Step left, clip a lone bolt and enjoy the fun runnel climbing to an anchor at a stance.

P2 (6a/10a): Step left from the anchor, clip a thread and runnel climb past 2 bolts to a stance on a loose ledge, clip a third bolt and traverse the ledge left to a 2 bolt anchor.

P3 (6c+/11c): This pitch starts down and left from the P2 anchor. Crux your way past a couple bolts, then traverse left. Clip the fourth bolt, climb straight up toward the fifth and dont get suckered left. Continue straight up, and then step left to the anchor.

P4 (6b/10c): Step left from the anchor and climb devious slabby moves past a few bolts. Step left to an anchor.

P5 (6c/11b): Once again, step left from the anchor, and then continue straight up a steep arête/bulge. Traverse hard left to the anchor.

P6 (6b+/11a): An amazing pitch that Im dubbing the C pitch because of its shape. Traverse left under a roof past a couple bolts. Pull the roof and begin slab climbing back right until gaining a crimp rail system. Traverse hard right to the anchor.

P7 (7a+/12a): An awesome steep pumper of a pitch!!! Climb straight up the amazing, overhanging headwall. Step right to the anchor.

P10 (6a/10a): Bust a hard move off the anchor, clip a couple bolts and move right. It is possible to link this pitch and P11 to the Biwakband.

P11 (5c/5.8): A runout easy pitch with two bolts, but the second bolt seems oddly off-route to the left, and can easily be skipped. Step right to a belay stance with a summit registry (not sure why its here).

P12 (5c/5.8): Step right from the anchor and climb straight up past 2 bolts. Angle right, then back left past several threads to an anchor at a decent stance.

P13 (6b+/11a): A steep/exposed pitch that climbs straight up off the anchor past a few bolts and into a flaring, angling corner system. Step right to an awesomely exposed belay stance.

P14 (6b/10c): Step right from the anchor, and climb steep terrain past a rappel station. Angle right into better rock, then back left to an anchor under a roof.

P15 (5c+/9+): Climb the corner to the right of the anchor past a thread and a bolt. Exit left, and carefully climb up the broken stone past a bolt to an anchor.

P17 (6b+/11a): An awkward finish that is the icing on the cake. Climb a splitter corner with good natural pro, step left on easier ground. Pull awkward cruxy moves at a bolt, then pull a roof past another bolt. Be mindful of loose rock at the top.

Descent: Rap the route via many rappels (it took us 10). Care is needed due to the steepness and traversing nature of the route. The last rappel is down Tsunami and is accessed via a fixed line that leads you climbers left. It is easily spotted from the P2 anchor of Caminando.

From the base of Reissend Nollen, it is possible to continue rapping down Vorbau in lieu of the 4th-5th class scrambling descent. For more info look at the Reissend Nollen main page. 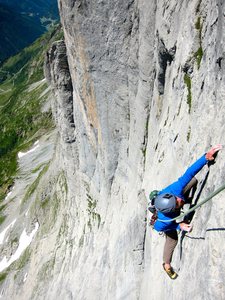 Dave cruising up the gorgeous stone on one of t… 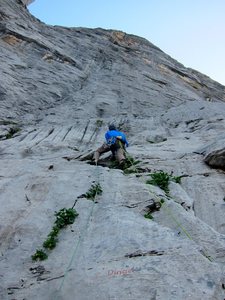 Dave starting up the first pitch of Caminando.