Routes in 6. The Tower Wall

Lots of slab climbing -- footwork and balance needed in the bottom 25 feet. Then easier slab moves. Then two short overhangs to the top.

This route seems to be much like the Risky Bear route assigned to the Three Bears Wall. It is included here so that climbers exploring Tower Wall can be aware that it's worthwhile to do it from near or the same anchors used for routes on Tower Wall, and to clarify a distinct line of climbing which does not cross other routes on Tower Wall. Anyway however the naming and assignment to a sector gets worked out, meanwhile go ahead and just enjoy the climbing.

. . . (Lots of vegetation on this rock as of 2015. Be prepared when climbing to navigate around protruding trees and branches, and dealing with holds slippery with grass, lichen, moss, dirt).

On the slab face just left of the crack system (of Ex-traction) which is about 15 feet left of the Shark's Tooth detached flake.

Top-rope set up requires long static line for top anchor. Likely need to rappel down to get both ends of the rope to the bootom.
Protection for Trad leading unknown, likely inadequate. 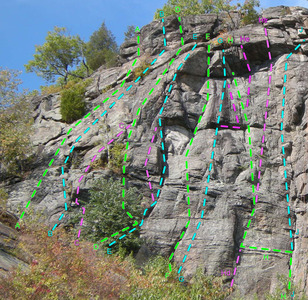 routes overview Left side Tower Wall A Risky B…