This route was an afterthought, something to help boost the crag's route tally, but it turned out better than expected. The line is a bit silly and perhaps contrived, but if you can ignore those detractions, the climbing is rather fun and provides a really nice jug haul warmup with great exposure.

Stick clip at least the first bolt, then creep out the exposed ledge to the southern tip of the fin. A short boulder problem of hand jams, finger locks, and barn-door liebacking leads to good jugs near the second bolt. Rail traverse along the southern arête, surmounting an obvious, vertical step with more liebacking on big jugs. Step right to Lonely Island Ledge, then crank the climactic This Aint Seaworld boulder problem to reach the tip of the Shark's Fin.

Climb the exposed southern arête of the Shark's Fin. It is also the furthest left bolted line on the east face.

6 bolts to a 2 bolt anchor shared with This Aint Seaworld. Stick clipping at least the first bolt is mandatory. The best belay strategy is to stick clip the first and/or second bolt, then toss the rope down to the grassy slope 15-feet below the start of the climb and belay from there. 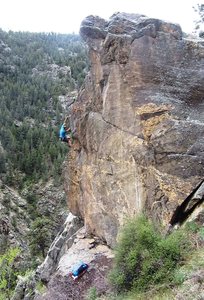 Fun jug-hauling along the knife-edge. 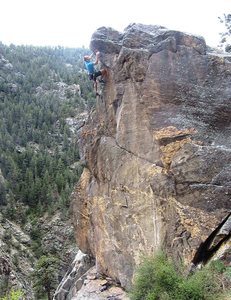 Pulling over the bulging dorsal tip. 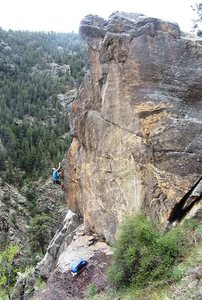 The exposed jamming-problem at the start.