This is a very committing route in that it is a very long approach with lots of up and down that would be a major pain to retreat on. Total mileage (up Frostbite, down Cool Glacier) is slightly over 40 miles. Be prepared to finish this route if you start it, carrying up and over. Be comfortable on steep snow before getting on this route.

Based on the occasional washout of bridges/roads the best approach may vary year to year. Most parties will want to descend an easier route, with the Gerdine Ridge/Cool Glacier route being the standard route currently. Based on this the best trailhead to park at is currently (2015) probably the North Fork Sauk Trail.
Drive the Mountain Loop Road 16 miles east from Darrington, Turn left at the Sloan Creek/North Fork Sauk Road 49 and drive appr. 6.7 mils to park at the trailhead. Be aware that there is a sign in the parking lot about break ins being an issue.
Take the North Fork Saul Trail #649 to the PCT trail. Go north (left ) on the PCT trail to Glacier Ridge. Expect to have the trail partly covered in snow from Red Pass north for a mile or two depending on conditions. The total approach to leaving the PCT is appr. 19 miles. (not tracked by GPS - forgot my spare batteries and couldn't leave it on the whole time).
A small but obvious path leaves the PCT trail on Glacier Ridge appr. 0.7 miles after Glacier Creek. Just prior to the branch trail the PCT trail makes a big loop around to the west and is starting to head back to the east and begins to descend. Where the branch path starts is also mostly above the tree line.
The path will lead to the crest of an alpine ridge - continue to follow this past some bivy sites to the lower slopes of the Ptarmigan Glacier. Kennedy Peak and the small rock outcropping SW of it are most easily traversed around to the left (west) of both. I had the GPS coordinates of Kennedy Peak (48.132108 N, 121.12541 W) preprogrammed into my GPS to ensure that I knew where we were although it was obvious.
Continue to ascend on snow the Kennedy Glacier SE and the Frostbite Ridge will soon come into view (see photo).
Ascend the ridge on snow, with pumice also an option in places (we stayed on the snow). Most parties will probably desire protection on portions of the ridge. I found small to medium nuts useful for the belays. We found snow up to appr. 45 degrees on this section.
Pass through the rabbit ears notch at the very top of the ridge and descend class 3 rock for appr. 150 feet to a saddle . We had a poor but barely functional tent placement for a Direkt 2 on a sloping ledge partway down this downclimb.

From the saddle, climb the steep snow slope right of the corniced edge (may be ice in later season) for 60-80 feet and it begins to round off to a lower angle. We found snow to 60 degrees on this section. Ascend the ridge to the crater rim, bearing left of the rock at the top. Descend into the crater with the easiest path being a sinuous one.
Pick your path to the top. We took a ramp that started on the right and went up and left cutting directly up at the top. We found great firm picket snow. We used two tools with mostly one swing perfect sticks in this section.
Once you hit the top ridge the actual summit is just across a little trough.

Descent - Be sure to know the descent. The standard descent is the Gerdine Ridge/Cool Glacier. It may help to have certain locations such as Glacier Gap (48.080051 N, 121.108357 W) preprogrammed into your GPS. Peakbagger.com has GPS tracks of the descent route.

Most parties will take at least 3 days. It took us 3.5 but we got a late start the first day and did no traveling in the dark.

Pickets and ice screws. 1 set of small to medium nuts useful for belays in places. Based on the really long approach we brought 2 pickets, two ice screws, and a set of nuts small to medium. Large nuts would work but weigh more. Depending on your comfort level you may desire more gear.
Bring the lightest rope that you are comfortable with. For our conditions (June 14) the ice screws had no value but this will vary year to year. Expect more ice later in the year.
We each used a longer tool combined with a shorter tool for the steeper sections. I used a Black Diamond Venom and a Petzl Quark 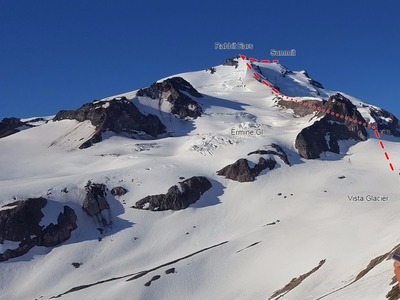 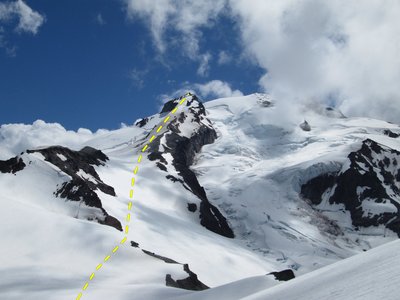 The first view of Frostbite Ridge 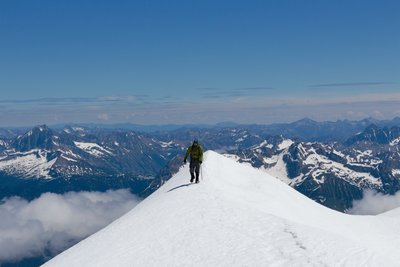 finishing up to the summit 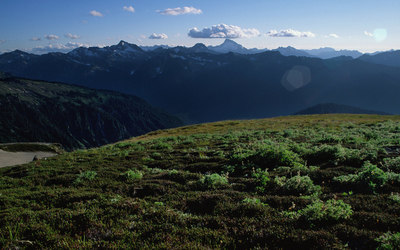 View from camp - a day from the road in August… 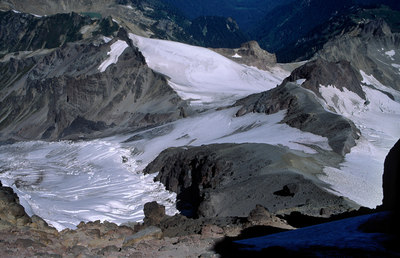 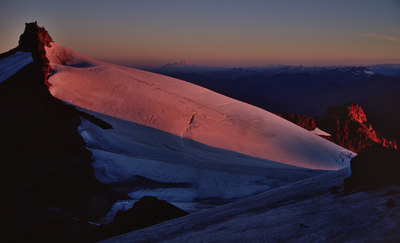 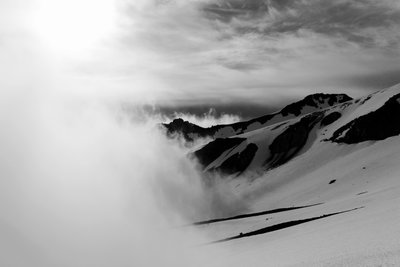 breaking out of the clouds on the vista glacier 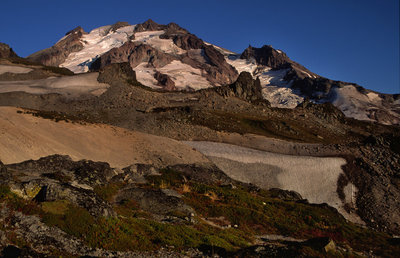 End of the day view of late summer conditons fr… 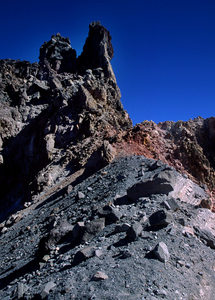 Seriously melted out at the Rabbit Ears - Augus… 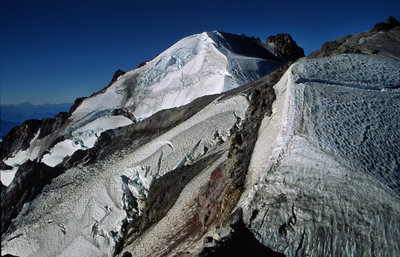 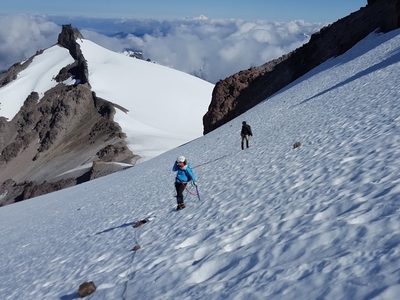 Snow climbing above Kennedy Pk on the Frostbit… 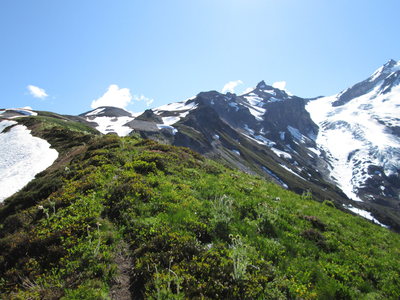 The trail up the ridge after leaving the PCT