This is the prominent gully which runs from Happy Isles to the notch at the north end of Grizzly Peak. It can be used to approach/descend routes on Grizzly Peak, and it is also the most direct approach to the southwest shoulder of Half Dome (although it's only the fastest approach to Snake Dike, et al, if you know what you're doing and are a fast bushwhacker)

The start of the gully is basically straight above Happy Isles. If you're walking on the path along the road, you'll cross the river and then the JMT/Mist trail leaves the road and heads off to the right (south). From the bridge, follow the trail for 200ft or so and then turn left and head straight uphill (east) through the forest.

Hopefully you'll start following a faint drainage and then end up at the bottom of a 35ft water-polished gully which looks like this: 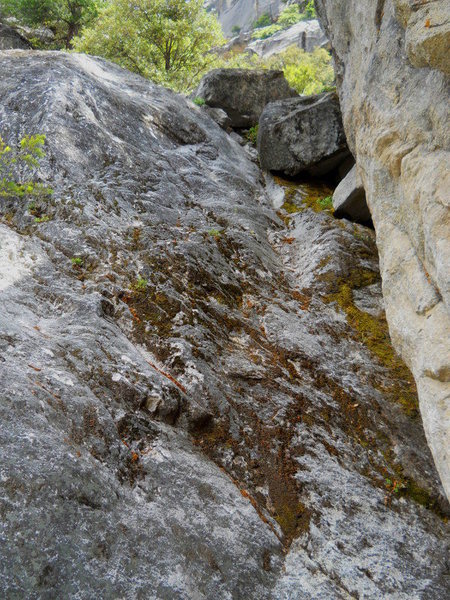 This is the only section of 4th class on the route, and it's pretty easy (especially going up). Most of the rest of the way involves zig zagging on ledges. There's a steep narrow 5th class gully off to the left which is off-route. Nothing should be exposed and some of the key bits of 3rd class scrambling should look somewhat well-traveled. The bushwhacking should also be pretty minimal. In the upper 3rd, the route begins to actually resemble a gully again with some 3rd class slabs and steep dirt/grass. Then the gully splits. I think either way goes, but I've only been down the south fork (that's climber's right).

From the notch it's 3rd class to the summit of Grizzly Peak. Avoid some steep sections by staying on the left (south side) of the ridge.

If descending the gully just read the description in reverse. In general I found it worked pretty well to stay to the right (out away from the trees/bushes) until I'd get cliffed-out, then cut back left to find an easy way down to the next tier.

Sticky rubber is pretty important for the slick slab/gully in the beginning. 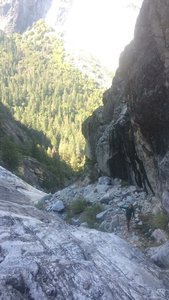 Tommy B at the bottom of the 4th class crux. Ve… 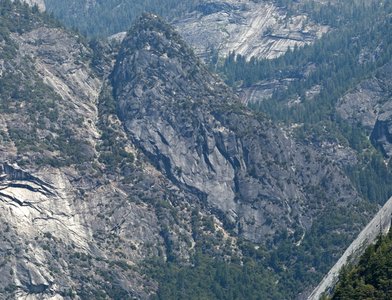 LeConte Gully - on left side of Grizzly Peak.…