Routes in West side of the tower

This route might be the most scenic climb on the entire island of Hvar...which is saying a lot.

In addition to feeling like you're in some exotic climbing film simply due to the setting, the moves themselves are just loads of fun. Slightly overhung limestone pockmarked with massive buckets keeps you thinking, and the Mediterranean sun bakes away the sea grime that usually forms on stuff this close to the water.

Some climbers might be intimidated by its relatively close positioning to the water and overhung appearance. Don't let either of these factors keep you from getting on this gem! You can belay slightly to the left of the route with a directional bolt for the belayer and easily stay on dry ground.

If you go to CliffBase, don't miss this one!

Farthest route to the right on the West side of the tower. 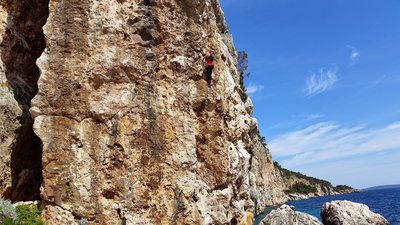 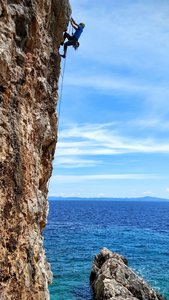 It's as good as it looks.