The original trailhead was closed after someone was electrocuted themselves while playing on the powerlines. Access to the cliff is now gained by parking in a nearby park and hiking through a trailer park. As yet there have been no known incidents as climbers hike through the trailer park however, please be respectful of residents and low key at all times. Please observe any posted no-trespassing signs if they show up.

The area classic. Usually started from a sit at a flat ledge on the lower side near where the two boulders meet. After moving up and left it can either hit the lip or stay low for a harder variation. A move to a hueco after a sloper ledge marks the end of the hard climbing and most mantle above the hueco. Used to have way more holds on it under the large sloper until one day some fucking moron took a hammer to the rock (no joke).

Try one of these following variations, then make up your own:
-Doing a reversal of/starting on The Rat
-Finishing a FULL beer from ones chalk bag mid climb, a confirmed B0.
-Transfer over from the huge ledge on the low angle boulder to the right of the start of this bp. Very weird!
-Mike does an up problem under the sloper rail. It's pretty fucking hard.
-The Buddha Belly uses the low holds to the right and a sloper (the belly) to bust up to the lip.

Most trafficked route here and maybe the oldest? Have easily spent an hour playing around on this rock.

Alex doing the easy warm up a while ago.
youtube.com/watch?v=EblNCFp…

Go past the Rayl boulder and find the big flat one with lots of chalk on it. When passing the turn for Prowler one can usually see if there are people working this problem. Equally being at the boulders offers a commanding view of the trail in from the parking area.

a pad or two as there are a few little boulders just close enough to tag you. 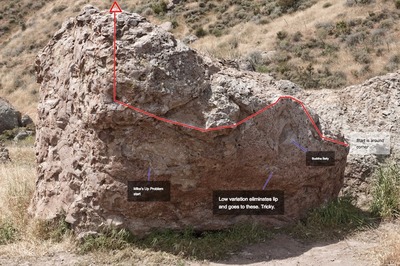 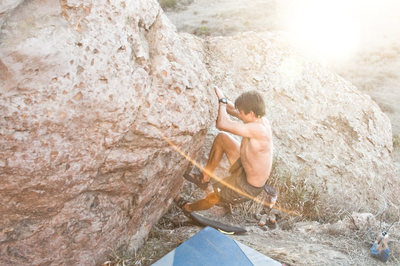 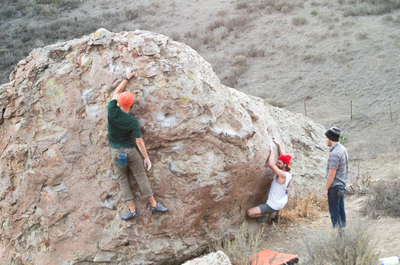 Alex waiting to hop onto the send train on a cr…