A long, fun romp on great holds leads to a nice no-hands rest before the final bouldery moves to jugs to the anchor. Pull on finger jugs up past the very high first bolt. More finger jugs lead past two more bolts and to the fixed cable draw of the fourth bolt. Paw your way up into the no-hands rest in the corner. Rest up and swing out on huge jugs to the fifth clip. Smaller-than-youd-like holds get you up to the six bolt. Move right to an awesome jug hold on some sort of round intrusion feature and then another steep move or two the anchors.

On the left end of the overhanging alcove area in the middle of the wall.

6 bolts to chains with lowering biners 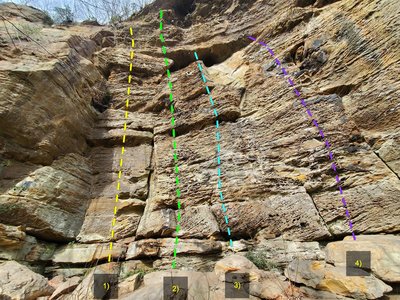 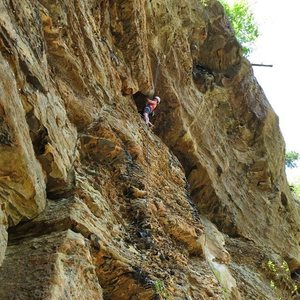