This technical masterpiece resulted from a collaboration between three legends of German climbing, Wolfgang Gullich, Kurt Albert and Norman Batz. The rock is uncharacteristically monolithic, with only a few thin and shallow features marring an others impenetrable wall. The cliff itself is just barey less than vertical, with a slight bulge at mid-height providing a brief sequence of overhanging climbing, and the crux. The sequence is never obvious, weaving from side to side as it connects an improbably line of disparate features. The holds are rarely good, but the rock protrudes just enough, just often enough, to produce an uncompromising, continuous line that will satisfy the most discriminating connoisseurs of technical wall climbing. Unfortunately this classic is noticeably polished, especially in the crux, and surely that has increased the difficulty slightly over the three decades since its first ascent.

The most obvious and attractive line on the left end of Luisenwand.

5 bolts to a hard-to-see anchor. 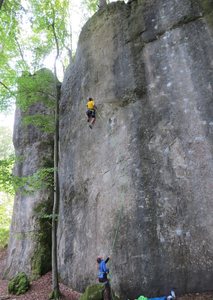 Lining up for a precise stab at the end of the… 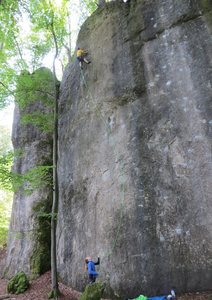 Deeper incut pockets begin to appear as you app… 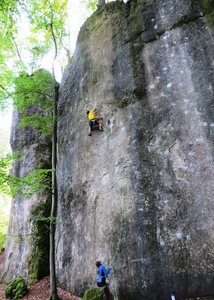 In middle of the crux bulge.