Its hard to beat this backcountry setting that overlooks Gothics Rainbow Slide, ledges on Pyramid and the Ausable Valley. The approach is long but mellow, making for a full day out. Top it off with an ascent up Gothic Revival on the southern side of the East Face if you have the time.

p0: The first tier isn't always in (it wasn't in for the first ascent, as shown in the photo), but offers a short climb up vertical ice to a snow slope leading to the longest pitch of the route.

P1: The next tier (NEI 3+) begins with a short vertical section before laying back on a smear/ramp to a snow slope (NEI 2). The ramp had thin 1-2" ice when we climbed it, adding a little spice.

p2: The third tier (NEI 4) is the crux of the route and ascends a vertical curtain of ice for 50'.

p3: The final tier (NEI 4-) ascends another pitch of vertical ice for about 20 feet before reaching the woods.

The route sits on the southeast aspect of Gothics' East Face, climber's right of Rainbow slide. It ascends the dominant ice flow up the center of three or four tiers (lowest tier was not in for the first ascent) of vertical ice curtains and smears.

Approach (3-4 hours):
The Adirondack Rock guidebook suggests approaching the east face of Gothics by descending from the Pyramid-Gothics col. This makes for a very long approach in summer or winter. The approach described here is faster and much more direct in winter or summer.

Park at the St. Huberts Parking area (across the highway from the Roaring Brook Falls/Giant Mtn parking) located 7.5 Miles west on route 73 from the junction of I87 exit 30. Follow the Ausable Road by foot .7 miles to the Lake Road trailhead on Ausable Club land. Hike the Lake Road to lower Ausable lake (about 1 hour) then trek up the Alfred W. Weld Trail for another 1-1.5 hour.

Descent:
From the top of tier 4, the descent follows obvious weaknesses back to the base of the climb. Walk to climber's left through the woods to a small cliff and obvious gully that descents westward along a taller 75' cliff. At the base of this cliff, continue descending another 100' west, and snake back around south east to the southern side of the route. Follow approach back to Alfred W. Weld Trail. 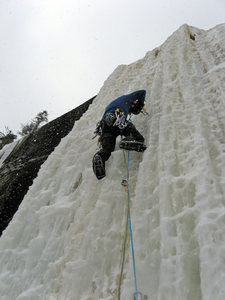 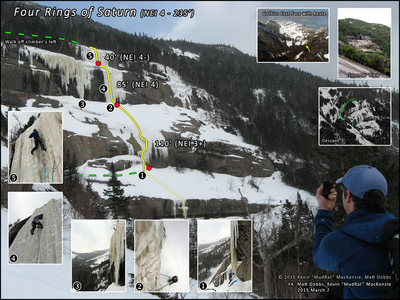 Photo of key areas during the first ascent. 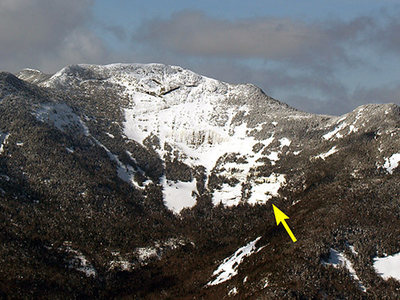 Location of the cliff on Gothics East Face. 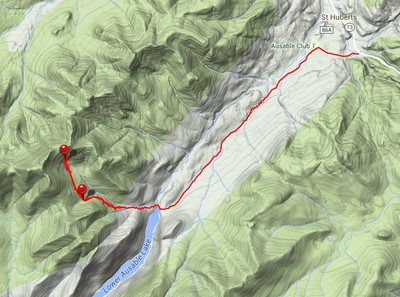 More About Four Rings of Saturn