Routes in The Putterman Residence

A decent line with mostly solid rock and varied climbing. This tackles the right-hand (northern) system on the east face (the face above the loop road) in two short steps separated by a large ledge.

P1-- We took the easiest and cleanest looking line through the lower band that rings the butte. Start at the far right (north) end of the east face in a shallow alcove with an OW crack. This is pretty much the only crack through this lower band on the east face that doesn't entail an overhanging choss start. Face climb for 15' (#1 or #2 Camalot slot for pro) through the loose lower band to a shelf. Launch up the OW above which progressively widens into a very tight squeeze. This proved more difficult than it looked as it's pretty steep and a bad size, but the rock and pro are good. The squeeze ends at another shelf, above which an easier chimney takes you to the large ledge above. There are two cold shuts for a rap anchor about 10' left (south) of the chimney, but it may be best to build a gear anchor in good cracks a ways back on the ledge. (5.9+, 70')

P2-- Walk up and left (south) on the ledge a bit to a right-facing dihedral of nice dark rock. The corner starts with a steep tight handcrack in a tricky flare which turns into an easier handcrack ending at a stance. Finish up an OW crack on softer rock to a good belay ledge with two bolts (no chains, not a rap anchor). (5.10, 70')

From the ledge atop P2 downclimb a short chimney to the west into a larger chimney/slot which can be scrambled up to the base of the various summits. Any and all summits can be attained via short (40-50'), chossy, easy-mid 5th class rambles. The westernmost and lowest summit (Point Talia) doesn't have an anchor, but the other three all have double 3/8" bolts or drilled angles with tat. We replaced the tat on a couple of these, but bring extra webbing.

Scramble back down slabs and short slots to the large ledge atop pitch 1 and rap off of the double cold shuts.

On the right (north) side of the east (roadside) face. 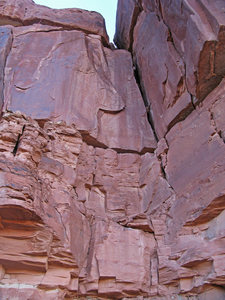 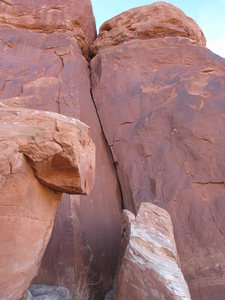 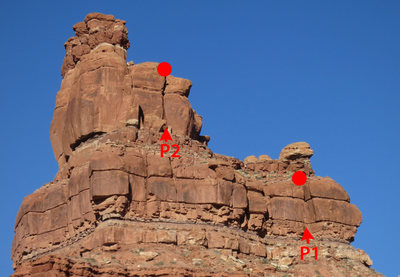 The route as seen from the VOG Loop Road.