Of the four 5.12s at the Love Shack, this one has the easiest start and biggest holds but is continuously steeper giving a good pump.

Stick clip the way high first bolt and start in the same cave as Happy Entrails but work out left to a vertical crack in an overhanging corner using some great jugs. Move up and right on a rail past the first bolt, to a fixed cable draw, and into a deep, dark hole (a.k.a. the rectum.) Pull hard moves out of the hole to a shake before tenuous moves into the dihedral above. Hero jugs lead out and left of the dihedral to cruiser terrain to the anchor.

A smidgen of history: In the early 90s, Cam Burns and a friend TRed a line here. This line shows up in the Jemez Rock book as Diseased Wet Crack with Running Sores (5.11c/d) but that line stays left of the dihedral at the top as best I can tell. The rock in that area to the left isn't great quality compared to the dihedral and the moves into and through the dihedral are super fun, and better climbing, so that's where I took the route.

While working the line on TR in the 90s, Cam and Paul placed a directional bolt in the dark hole by standing on a step ladder (!). I incorporated this bolt into this route but, because the bolt is in a position to cross-load the bolt-end biner, I put a fixed cable draw on it.

Six bolts to anchors with chains and carabiners. Second bolt has a fixed cable draw because bolt is in a bad spot for carabiner cross-loading. A belay-redirect bolt is down and left of the route in a location that both keeps the belayer out of the stream and keeps the rope out of the way of the climber.

The first bolt is at 15' up so it's highly recommended to stick clip it. This bolt is up so high in order to keep the belayer out of the stream.

A little fun with some video from the route 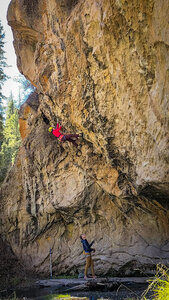 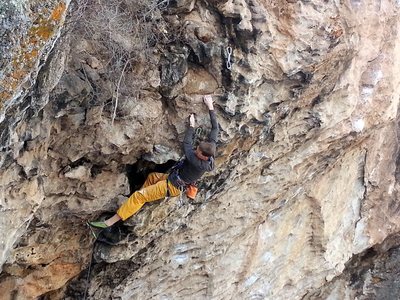 Steep but quite juggy. February 2015. 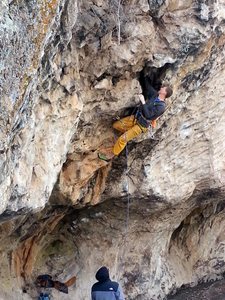 Channeling my inner proctologist while digging…