Climbs nice dihedrals with an exciting and airy finish on the arete above Not on a Weak Day.

P1. 5.10d/11a. Boulder up and left from the base of the Not on a Weak Day offwidth past a bolt. Tenuously lieback past two more bolts then up a dihedral. Ascend another dihedral to a stance below the upper overhangs. Clip a bolt, step up on to the face, then move right to the arete. With hands on the arete and feet on the overhanging right face, climb the spectacular arete past two more bolts to bolted anchors (left of the Not on a Weak Day anchors).

Climb the arete on the left side of the gash above Totem Tower just left of Not on a Weak Day. See the photo.

Six bolts and a light rack to 2.5 inches. 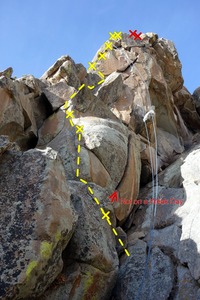 More About The Outer Edge