In 1981, the great John Bachar visited Germany to participate in an international climbing festival. During his visit he claimed the first ascent of this open project on the right side of Krottenseer Turm. He graded the route 5.13a, which made it the hardest route in Europe at the time, and one of the hardest in the world. The name is taken from the title of a John Coltrane album, and a not-so-subtle dig at the European climbing scene. According to Güllichs Biography A Life in the Vertical, Bachars ascent was a huge deal in Germany. It made Bachar an instant star, and the route an instant test-piece. The line follows a discontinuous groove with an intermittent crack that leads over several steep bulges. It must have seemed very futuristic for the day, considering its steepness.

The route begins with slabby moves on big jugs to reach a horizontal break below a steep bulge. A few big moves between sinker pockets lead to the lip of the bulge, where a thin seam appears and most of the pockets vanish. Strenuous liebacking and stemming leads up the groove. At the top of the seam, the route traverses right below a roof, and then clears a final bulge before following a long slab to the anchor.

The second route from the right that begins from the ground. Immediately left of Hitch Hike the Plane.

6 bolts to an anchor. 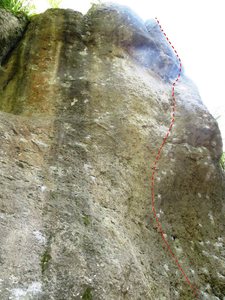 More About Chasin the Trane