P1 Begin up the varnished left facing corner system via fingers, then big hands and fists. Climb into the chimney and set a belay in a hand size splitter. This belay is nicely sheltered from the loose rock at the top of the next pitch. 95' 5.10

P2 The chimney is reported in Bjornstad's National Park book to go for two pitches, but is only 20' long. Climb the chimney, then turn a roof to exit on a big hands splitter. Continue for over 100' up a steep varnished hand crack. Changing between big and thin hands, it is mostly perfect hands up to a wild roof. Work your way around the roof and up onto a sloping ledge covered with stacked, loose rock. Move left along the ledge and negotiate a second roof for more exciting and awkward climbing into a brief slot. A .5 protects leaving the slot. Work up a crumbly finger crack to a shoulder. Traverse out right to the "Saddle" casting about looking for a good belay. 190' - 220' 5.11

P3 It is difficult to determine where the 1st accent went here. We crossed the saddle and climbed a crack on the north side to a large ledge 20' below the summit. A sandy bulging .75 splitter guards the start. Climb through this (C1) into a pod below a large wedged block. Tip toe around the block and through some looseness to a nicely varnished corner system which is followed to a ledge. 85' C1 5.10 (could go free around sandy 11+?)

P4 "It is hoped future parties will not place bolts but climb the summit block in the same high style as the first ascent party". High style indeed! A thinly patinated face is climbed for 20' to the summit. Offset nuts and tcu's protect the opening boulder problem, which for us, was a shoulder stand. Committing climbing past a pod leads to the summit. This pitch is demanding and hard to protect. Locate a single drilled angle on the summit (the only fixed gear on the entire route!) or belay from a large boulder on the summit. 20' C1 5.10 (free at 11?)

Descent:
Rap down to the saddle off of a single drilled angle which can be backed up for the first person by slinging one of the large boulders on the summit. 100'

From the saddle, scramble down into the gully on the south side of the tower. Hike/downclimb through boulders in the gully to a final drop. Pick one of the many boulders on the lip to sling for an anchor. Make a 120' rap to the ground. One 70 barely makes it.

The route is located on the west end of the "Tower". It follows a 300' left facing corner system up to a saddle separating the final 100' tower from the main cliff band. The route receives sun starting in the late morning and throughout the remainder of the day. 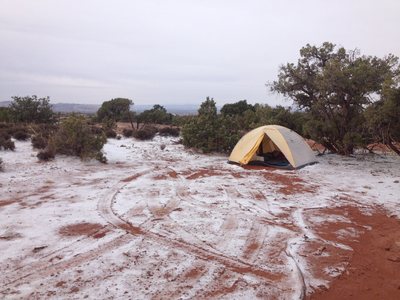 Sleeping in after jugging back to the rim durin… 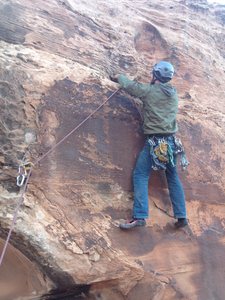 Herb Crimp about to whip onto medium quality ca… 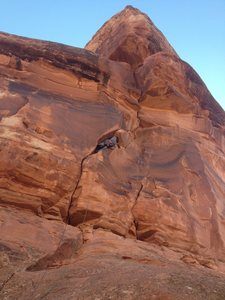 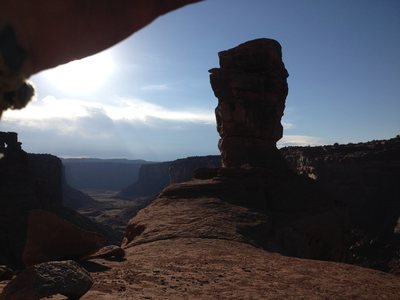 The 100' summit tower from the saddle. Looking… 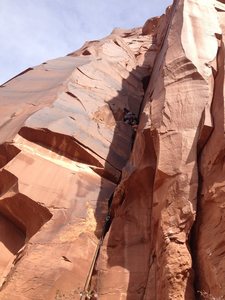 Scotty Palmer leading P1 which ends in the chim… 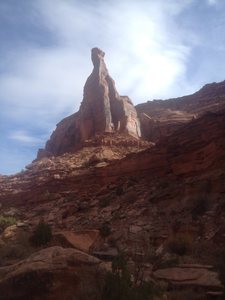 View of Saddle Tower Buttress from the approach…