A direct line on the imposing North Face. This is a fast route, with most of the climbing on 40-75degree neve. Easier than it looks, logical weaknesses break through three rock bands with brief sections of good climbing on shattered granite. Good exposure throughout. Recent rapid decreases in ice cover have revealed more rock, making climbing more difficult than the original given grade (during the dry season). On the first rock band we encountered some climbing on verglas over slab(our crux). The second rock band is passed by some very enjoyable moderate mixed climbing. The third features a few body lengths of featured, vertical rock(classically the crux). In well-iced conditions this route could be very easy. It will continue to get more interesting as conditions on this sensitive route change.

note: this is a north aspect, so expect sweltering midday sun. get an early start on a cold day to avoid falling stuff

Approach as for the normal route on Ishinca, eventually turning right and sidehilling above large boulders. Go through a distinctive dip in the North Rib and down a bit to a place to camp at about 5200 meters. A snow apron takes you back left to a brief mixed ramp, and then a direct line up the rest of the face.

At the summit plateau, true summit is visible to the SW. We did not go there. Snow conditions permitting, it would not be difficult, just tiring.

Descend via NW face route with rappels, then down climbing, then an ice fall maze and traverse around near the summit of Ischinca.

Minimal rock rack with pins and wires. Plan to solo or simul the steep neve. No ice of sustained difficulty, 1-3 screws. Bring 1-3 pickets. 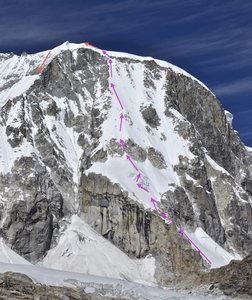 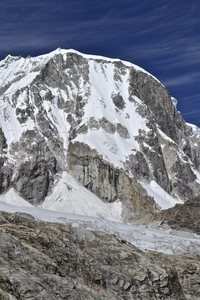 The north face of Ranrapalca. 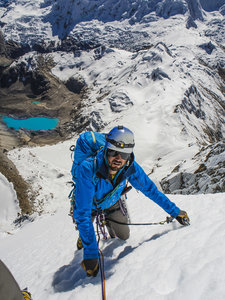 2/3rds of the way up the North Face of Ranrapalca 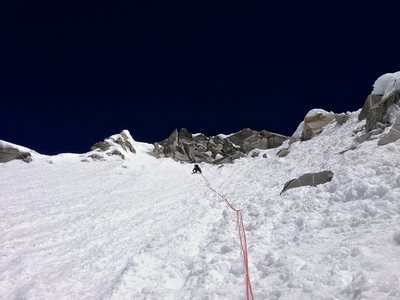 Heading up to the final rockband c.6000m under… 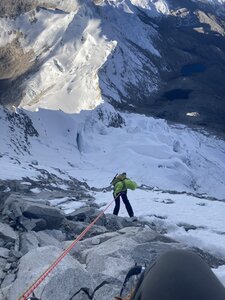