An "easy way up" the central depression of Wallface. A combination of; scrambling, you choose when to rope up, tree island linking, climbing, then getting back down.
Given highest grade because of the greatness of the "sum of the parts" .. a true wilderness climbing experience with a little bit of everything, good and bad.
Many thanks, and all credit goes to Steve R. for the following detailed description..


P1 - Start 10-20 feet to the right of the highest point of land below the central depression of Wallface. A Climb 30 feet straight up very easy (low 5th class), but unprotected,  wet/dry scrambling . Once, you reach  a small ledge, traverse right 70 feet to a tree island,
below a large rock buttress, the traverse protects fairly . (You may want to put your climbing shoes away at this point--the rest of the route is mostly on grass and/or rocky ledges where a semi-rigid alpine boot works best.

P2 - Traverse ~180ft right along a grass and tree covered ledge until you see the next obvious ramp, which goes upwards and to the left. There is also old tat here. This, as well as the subsequent pitches, have the occasional boulder or rock move to navigate over and/or around. (P2: the first zig right)

P3 - Climb a tree, rock, and grass covered ramp up and left ~140ft. Awkward moves around boulders and trees. Some exposurerie . Once again there's some old tat to belay from. You know to stop here because you can see the next, somewhat obvious tree and grass covered ramp leading up and right (look for the easiest option). Climbing further left leads you into the central depression--you do not want to go in this direction. (Of note, one continues along this ramp into the central depression if you want to climb Weissner's Route, which is a different 5.5 climb--see guide book). (P3: the first zag left)

4 - Follow the tree, rock, and grass covered ramp up and right ~120ft and belay from moderately sized alcove. This belay station is protected and comfortable. Once again build a gear anchor or use old tat, if present. The next ramp up and left is obvious and marks where you should stop. (P4: the second zig right)

P5 - Once again follow the ramp up and left. This pitch is shorter than the previous 3 (~100ft). This pitch has a rock move or two in the middle that is mid-5th class and readily protectable, both before and after the moves. You belay from a well-protected spot within a small grove of pine trees. You can see and coach your second through the rock moves from this belay spot. There is old tat present. (P5: the second zag left)
P6 - Longer that P5 (~150ft). Go up and right along the ramp system of least resistance. Starting this pitch stay low at first, wrestle with a l tree, then gain ttl he b ramp (versus going straight up to gain the ramp). About halfway there's another move or two of mid 5th class rock with great exposure. It's readily protectable with a #2 or #3 BD cam before, and a old piton after. There is a jug for hands and a crack large enough to jam a stiff boot perfectly. Next, continue along the ramp around a chossy bulge (or buttress) to nice belay spot in an alcove high and right. (There will be significant rope drag around this chossy buldge and you will be out of communication with your second. Alternatively, this pitch can be split into two with the leader belaying just past the rock moves--this latter option is not great because the gear options are limited). (P6: third zig right)

P7 - Take the long grassy, rocky, and tree-strewn ramp ~180 to the top. This ramp is obvious and easier than the previous two pitches. Some rock moves, but they're low 5th class. About 20ft from the belayer, stay climbers left over the top and outside of a large boulder (i.e. not between the boulder and rock wall, where a tree blocks you're progress--the second, however, may be forced to go between the boulder and the wall due to rope tensiong, ). Follow the ramp up and left with good gear to you reach a small tree, place a directional, then climb the mossy ground above the rock face to an old tat anchor in the small trees about 25 above the cliff. You will be out of communication with your second.

DESCENT: Adirondack Rock recommends to bushwack off--not to rappel. I would agree. The rap stations were all old tat attached to suspect features and small trees (Fall 2018). Plus there is significant risk of getting your rope caught and too many random tat stations to know exactly where to go. That said, with new slings, etc. this route can be rapped. We walked off to climber left. It probably took 2 hours to get back to the trail. First summit Wallface mountain by nasty bushwhacking. Just south of the summit is a large football field sized of cut down trees (maybe as a helicopter rescue point?). From here the bushwhacking is easier with the occasional faint trail. The faint trail follows near the cliff edge to the east and likely meets up with the potential walk-off option from "The Diagonal." From here the route south and then south east is marked by pink ribbons on tree branches. The bushwhacking is easy here. You eventually drop into a wide col south of the Wallface summit. From here you follow the pink ribbons more east back around the southern margin of the Wallface cliff. Here we lost track of pink ribbons (or they stopped), and just went directly down to where the Indian Pass trail and the Diagonal approach trail (which is different and more south than where The Case route approach trail) meet. This was mostly eastward around the occasional cliff band and stream covered slides. This bushwack was moderate in October--but like dangerous in the dark, due the sudden and occasional drop-offs. Once back on the trail, one can head back uphill (ugh) to the previously mentioned campsite, or back to the Wallface lean-to (~2 miles) versus Upper Works parking lot ~4 miles away.

From the Indian Pass hiking trail (ADK #125) you break west towards the central depression of Wallface just north of Summit Rock. You know you're at the correct spot to leave the hiking trail because there is a small stream (Indian Pass Brook) adjacent to both a cabin-sized boulder and obvious/excellent camping spot. Standing north of the boulder in the camping spot you take the southern of two herd-like paths (the northern one goes to a less optimal camping spot). Take this faint herd-path straight upwards to the central depression of Wallface (ie the highest point of trees below the central face). The path is somewhat apparent--but straight up is also fine. Once you hit the rock face you follow it up and left to the highest point of trees and land--the route starts about 10-20 feet right of this eventual highpoint. The approach from the trail to the start of the climb is about 30 minutes. (Of note, the Wallface lean-to is about 2 miles south of summit rock on the Indian Pass hiking trail).

One 60M rope (if walking off). One set of nuts, one set of cams 0.3-3. Slings: 7 alpine single and 3 double. Rock shoes for P1. Semi-rigid alpine boots P2-7. GPS and headlights. Radios could be useful. This route can be safely climbed in the rain. All pitches are traverses that can be safely belayed from above with a Munter. (P1, P2, P3, P4, P7 are 4th to low 5th class. P5 and P6 have short segments of exposed bouldery moves.) 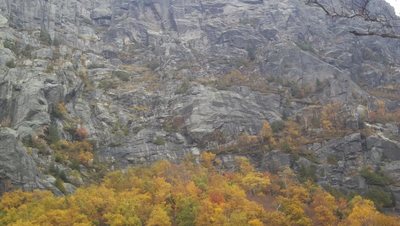 Start of climb is at the high point of the land… 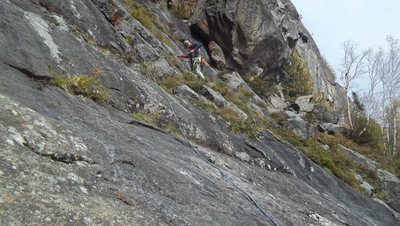 Start at high point of the land, slabs above yo… 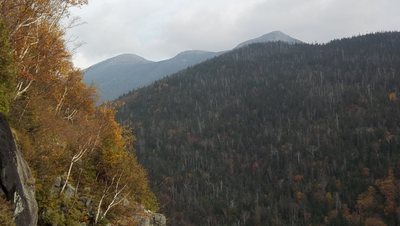 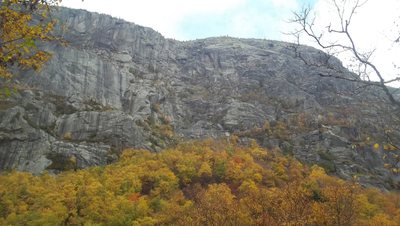