The north face of Mount Borah is an Idaho classic! It is a huge and imposing face that looks like it belongs in the Canadian Rockies.

Although this route can be done as a snow climb in the early summer once the avalanche danger has subsided, it is best to wait until early fall when the route becomes pitch upon pitch of beautiful alpine ice. The number of pitches of ice will vary depending on conditions, and how high up the snow you have to climb to get to the start of the ice.

After climbing the initial snow or scree field, you will have several options as to how to pass the lower rock band. It is best to scope this out from a distance so that you can choose the best looking option based on the conditions.

Eventually you will reach an upper snow/ice field and then the large summit headwall. There are several variations to this route, but the original (classic) line ascends a couloir on the right side of the headwall to a notch on the northwest ridge a few hundred yards below the summit. This couloir is typically steeper ice than the rest of the face, and 2 or 3 pitches long.

Once at the notch, easy scrambling up and to the left bring you to the summit.

From the small parking area at the mouth of the Rock Creek drainage, cross the small diversion dam. From here your goal is to find a way up the drainage. There is no trail, although you may encounter short bits of game trail here and there. In general, you will be choosing between bush whacking down low, or side-hilling up high. In general we found the easiest going on the right side of the drainage as you hike in.

After several hours of hiking you will eventually get your first glimpse of the north face . . . the base of which will still be way above you! Standing between you and base will be a large rock tower. You can pass the rock tower on the right (easier), or on the left (shorter but steeper). Either way you will end up at the base of a large snow or scree field that forms the very bottom of the north face.

Note that I have also included a photo on an alternate, shorter (but sketchy) approach.

Once you top out on the summit, you can walk out using the Chicken Out Ridge trail. Take this most of the way down, until you get to an obvious notch with a tree that looks nice to sit on. From here the trail drops down and to the left, but you should leave the trail and head right, down the other side of the notch. Head cross country to the northwest, trying not to get sucked too far down the drainage to your left, but also not end up to far to the right where you will get sucked down a different drainage. Eventually you will find yourself on a large hill overlooking the mouth of Rock Creek Drainage, where you parked.

Ice screws and thin pitons (knifeblades/bugaboos). Note that the rock in the Lost River Range is notoriously terrible, and the rock on this route is bad even by Lost River Range standards. Most large cracks in the rock exist between the main formation and a loose block. Leave the cams at home. If you're lucky you might find a couple good placements for some smaller nuts, but most solid rock placements require some form of thin pin. Your best bet by far for reliable gear is ice screws. 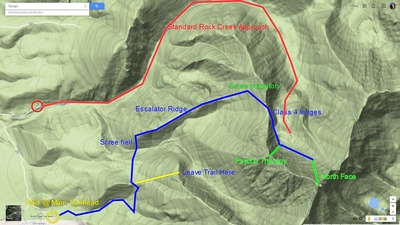 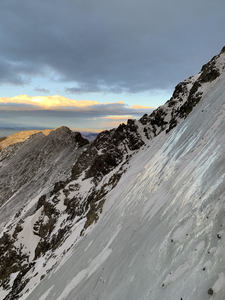 Right below the direct summit coulior 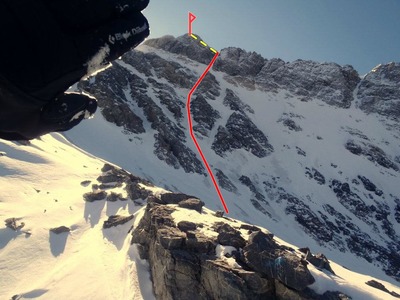 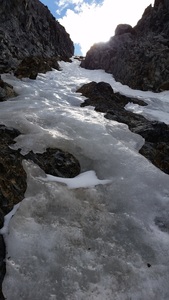 The two pitches of beautiful 70° AI3 ice of the… 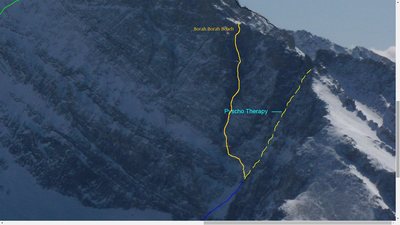 Psycho Therapy in relation to Borah3x

Descent back to rock creek 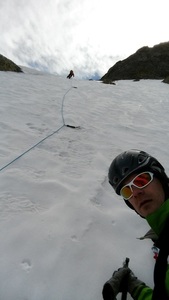 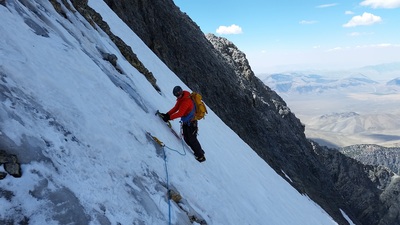 On the traverse over from the main colouir to t… 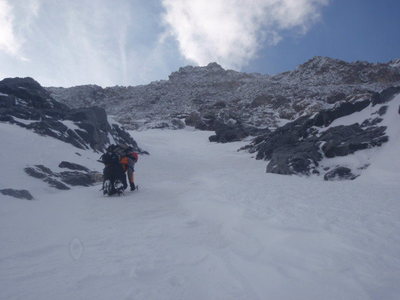 Its steep enough to want a rope. But tame enoug… 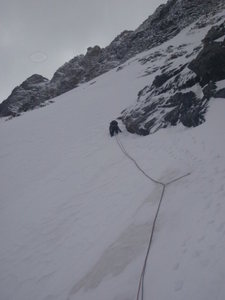 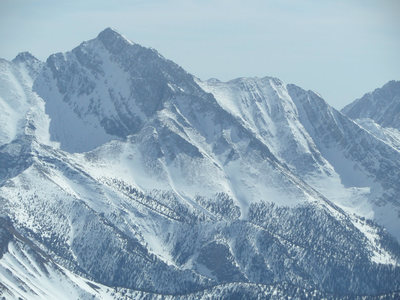