Routes in 2. Height of Land

Access Issue: As of July 2, 2021 Painted Walls are now OPEN. The Peregrine Falcons ( 3 chicks) have fledged! Rainbow has always been open. You may see the Painted Walls closure signs on the approach path to Rainbow. Details

Lhasa, of course, is the capital of Tibet, and it would take Ed four years, until June of 1986, to get there. Perhaps the golden streak of rock just to the right of this climb was reminiscent of the golden roof of the Potala, the building which is seen in the spectacular cover photograph of Galen Rowell's book Mountains of the Middle Kingdom.(Published in 1983)

This was one of the more difficult climbs to find, as in Ed's guidebook he mentions only a "birch tree" and very little info on the topography of the rock. It is definitely worth seeking out!

START- The usual approach is from the Face Dances area. About 100 feet left of the belay for Face Dances. After the path along the base passes Herm. flake, it rises about 20-25 ft to the true "height-of-land" area. On your right is a flat-ish slab area. [Photo(s)]

Since the real Road to Lhasa twists and turns, it seems reasonable the right-side variation is the route of first ascent, and is now so listed.

Pitch 1 is a true gem! If only P2 could be equal, BUT there's no need to climb P2, AND you can always climb Var 1

P1 - Start on the flat-ish slab and then move left up a very short and shallow "corner" to reach the left end of the arching crack. [Var1] (Gear here, small TCU, then a 2nd, and better, piece can go in a few inches higher. Ed used only nuts.) Traverse right, passing an unbelievable hand hold (and gear placement, a med. cam, purple (0.5) Camalot) and make a thoughtful move to a flake ( hidden crack behind it)  Standing on the flake, ( the bolt high on your right is on Golden Potola ) move back left and then up moon-scoops to an anchor.  75 ft 5.7, (although a bit more difficult if you don't see the transition sequence)

Descent - From P1 a "no brainer" the dbl bolt anchor is set for rapping or TR-ing; from the top of P2 there is no fixed anchor but one can rap with 2 ropes down to the P1 anchors, then 1 rope to the ground. 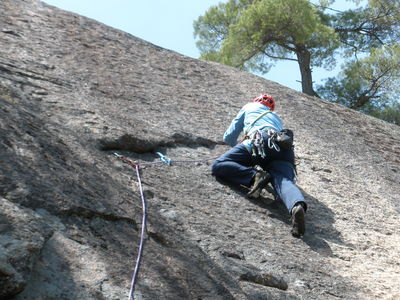 RW Leads the Road to Lhasa 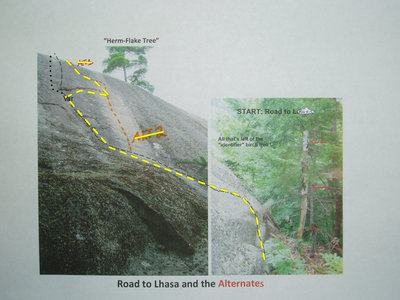 Road to Lhasa - Originally the photo showed the… 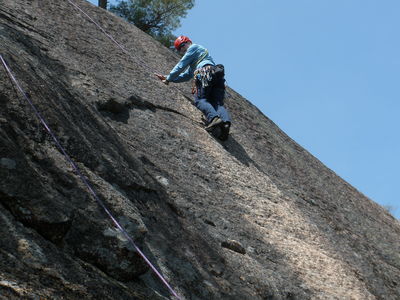 RW on Top Rope on the "Golden Potala" variation 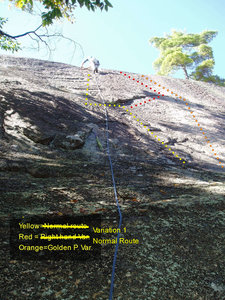 On the "Road to Lhasa" Variation 1 The climb co… 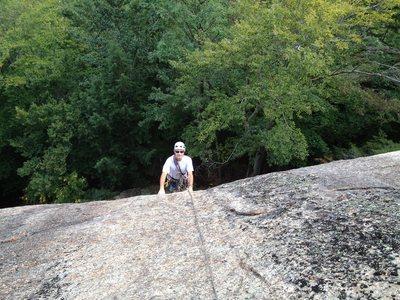 Bob Hall on the Road To Lhasa

More About Road to Lhasa