Start to the left of a brushy low angle corner below a smooth sheet of crimson patina. A few long moves to positive edges and a touchy mantle lead to the third bolt and the first crux, a delicate rightward traverse. Don't peel off these awkward moves and you'll be rewarded with a rest below a small broken roof.
Tackle said roof and establish on the face above, following an offset seam with the occasional edge or crack feature and fighting the growing pump by milking unobvious rests. The climbing gets steeper, thinner and more technical, eventually leading into an intimidating blocky area. The route takes the path of least resistance through this, heading left to an obvious stance where a large cube used to reside. Things may appear a bit hollow in the area but we were ruthless with the cleaning and what's left is not going anywhere.
Take note of the 9th bolt a ways out right and don't get greedy with an early clip: it's easily reachable from the stance, not so much from below while pumped.
Gingerly surmount the last of the blocks and veer right, aiming for the faint dihedral which forms the upper headwall. Take a deep breath and fire the last 30' of slightly overhanging rock, pulling long technical moves on small but positive edges. If the pump catches up with you before you clip the chains expect a long clean ride!

The route got its name from the numerous trips we had to take up and down the poop chute and the massive amounts of choss we tossed off the top before we could even start cleaning the face. As usual in the Jungle, the recipe for a rad new line is a (dumb) vision, lots of sweat and time with the trusty hammer/crowbar/steel brush combo!

The fastest approach is from the top. Follow the directions found on the Distant Drum main page to find the poop chute which deserves the end of the Village Wall and the Planet of the Apes. Make a right (heading South) at the bottom of the chute, round the corner and you'll find the route, easily identifiable by a giant sheet of red patina at the bottom of an orange face (and a large destruction area at the base).

If you have a dog, want to warm up along the way or dislike via ferratas you can park at the Lower Jungle and take a 25-30 minutes stroll depending on the weight of your pack.

11 bolts to chain anchors. The 9th bolt can be hard to spot, rock quality dictated a placement a bit further right than we'd have liked on the side of a small prow. 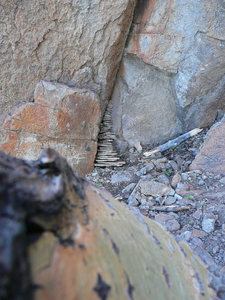 This choss pile marks the start... 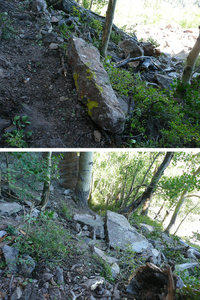 Destruction at the base. The blocks were recycl… 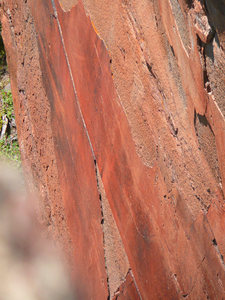 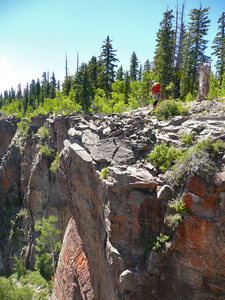 This is what the top of the line looked like pr… 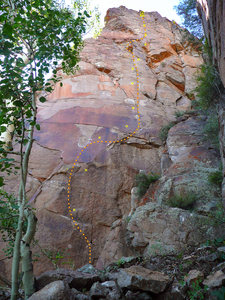 More About Chutes and Daggers