Access Issue: Road to Agnew Meadows is closed in the winter Details

There are two parts to the climb: the bigger, pure blue ice main flow [Patience], then a second, thinner, shallower, mildly mixed pitch [Fortitude] reached half-way down the descent gully on the right.

After the long(ish) skin in, gear up, then do some ice bouldering over a bulge to the base of Patience. Difficulty is dependent on conditions and line chosen but expect WI3-4 for ~60'. Either set up an ice screw anchor for good top-down photos and partner-heckling, or boot up the snow to a tree anchor. You can either simul-climb or solo easier terrain to the readily apparent descent gully on the climbers' left.

Half-way down the descent gully lies a shorter, thinner ice smear [WI 2-3] with a small mixed section on top. Bring rock pro if desired, but none was placed on the FA before reaching a tree anchor. From the top of Fortitude, hike climbers right until regaining the same descent gully as Patience.

Finish hiking down the descent gully through snow to your gear, grab lunch and skin/boot up the neighboring couloir for great views of Banner/Ritter and a fun ski down to the San Joaquin, and your long ski out.

Thoughts and a recount of the FA here: bit.ly/patience_fortitude

Follow the description on Gladys Lake. Try to scout conditions from Mammoth Mountain before committing to the long(ish) approach. On the western flanks of the San Joaquin River, on the NE-facing cliffs ~ below Gladys Lake. Its exact location and climbing condition should be apparent during the skin in.

~6 ice screws, depending on your comfort level on ice. Bring a mix, from stubbies to 16cm. 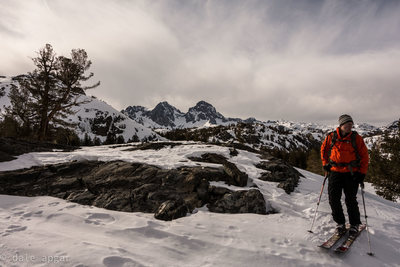 Scotty on top of the couloir 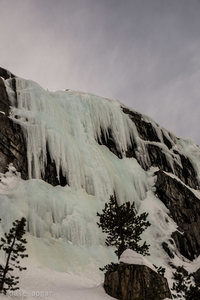 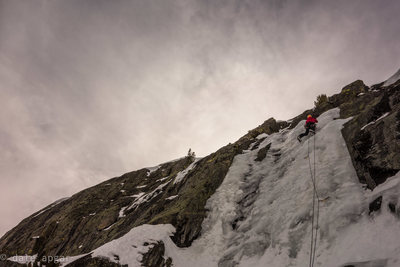 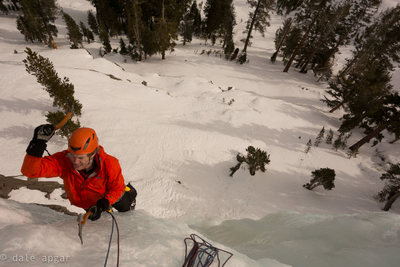 Scott Rokis during the FA on Patience 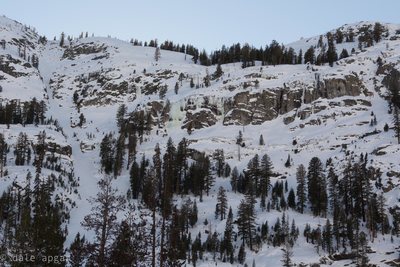 Beta photo: Skiing on the left, ice on the right

More About Patience and Fortitude