I believe this to be the most frequently used start for the (sandbagged, imo) 5.8 SE Face Route. While there is a series of easier pitches that traverses in from the left via a series of ramps/ledges, this is a more aesthetic line with reportedly better climbing, more consistent with the difficulties you'll encounter higher up. Corner climbing with some minor overhangs, great jams, and awesome crimps!

The SuperTopo book lists the first pitch as being 5.9 and the second being 10a. I found them both to be pretty equal, and the consensus seems to be 5.9(+). I felt there were more difficult sections (by a grade) higher up on the route, though I admittedly may have gotten off route for a section. I'll stick with 10a here as this is what is listed in guidebooks and by Peter Croft, though the consensus will likely be 9/9+. In summary, if you're confident you can do the rest of the route clean and quickly, there is no reason to avoid the direct start.

I thought these two pitches were phenomenal, and some of the best on the route (though there were some incredible ones higher up as well).

On the first pitch you'll pass a rappel station on your right, you want to keep climbing, don't set up a belay here. I did stop here, thinking it was the end of the first, and with a 70m rope I really had to stretch it to get to the top of the 2nd pitch with some sizable runouts to conserve pro. The top of the 2nd pitch is very obvious as it's a ledge that tops a minor buttress. Traverse around to your (climber's) left to join the route.

The original start begins more-or-less level with the toe of the Ken Minaret to climber's left of Clyde, while the direct start is pretty easily identified -- it's the clean, right-facing corner at the base of the SE face.

Other than being more in line with the rest of the route than the original start, both in terms of difficulty and location, it's also much easier to find.

Standard alpine rack, whatever that means for you at this grade and in this environment. I led both pitches and used doubles. Pretty straightforward protection, and plenty of it. 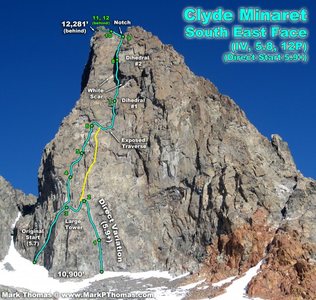 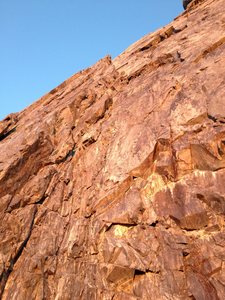 Looking up the first two pitches of the direct… 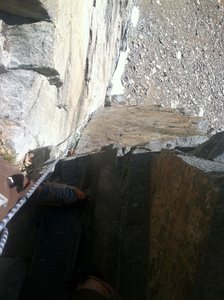 Sorry for the poor quality pic, but at this poi… 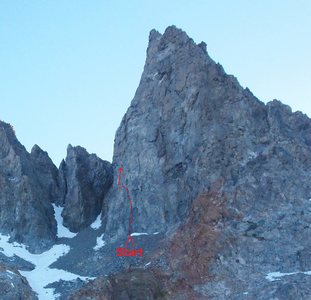