This area is under the Parc Régional de Val-David Val-Morin administration, a daily fee is required to climb, hike, bike etc in the park, FQME members benefit from a rebate as well as group outings.parcregional.com

An easy first few moves yield to a thought-provoking section on iron-rust colored rock. Great, varied crack climbing up to an offwidth section. Then as you tired, the seemingly never-ending face yields to a mantle & the anchors.

If you are going to rap from the top, you can reach the anchors on the slab section below with a 70m. Then a 2nd rap would get you to the ground from there. With a 60m you would likely need 3 rapps.

The paper guidebook is sightly off if you use the belayer's anchors as a mark. If you gained Crown by climbing Imperial (5.9) and skipped its anchor, you arrived at the base of Crown Direct (10a) and an anchor on a small ledge, at the beginning of the Crown wall. From there, an easy traverse to the climber's left passes a large boulder (5.7, might want to plug a piece of gear) and leads to a 2nd belayer's anchor on a larger ledge. That 2nd anchor, roughly midway on the Crown wall and just before the ledge angles upward to the trees, is right at the base of this route (Diamants de la Couronne). The guidebook erronously marks that anchor as being before the large boulder.

Regular rack. Gear is decent enough, though the offwidth section might feel committing if that's at you limit. Perhaps a larger piece (#4 or #5) could protect that section. However the gear below is good and the offwidth section isn't too long. Decent route to push the grade. 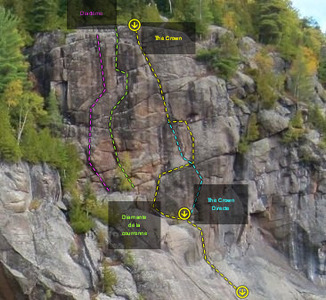