In the late 1970's, my old friend and mentor, Wade Mills (of Sonoma, CA), made a number of forays to the Wheeler Peak area. One of his efforts resulted in a route on the spectacular NE face of Wheeler Peak, which is recorded in Michael Kelsey's guidebook "Hiking and Climbing in the Great Basin National Park". I thought I'd provide some information and credit to Wade Mills on this. The route ascends the main face, starting near the center, then up to center right, then diagonaling across the upper face to just left of the high point of the peak. Mills made the solo first ascent on June 19, 1977 and called the route "Stella by Starlight." He rated it 5.8,A3+,Ice 9. He found no signs of previous activity on the wall and left nothing behind himself. The Kelsey guidebook description states, in part: "Mills began with a Class 4 snow and ice climb of 100 meters to a ramp. He started left, turned to the right, then traversed under a water gully with ice on top. He then climbed the wall next to the gully (left side) which had some running water. This was 60 meters, which he rated between 5.5 and 5.8. He then went left to what he calls "a thin ledge -- open book" at 4.0 - 5.5. Above, he went up some overhangs - with aid, which were wet. He made two pitches on thin horizontal holds at 5.8. He finally got onto a long ramp angling up to the left. This ramp fades in places and had ice all over. After many pitches, he got off the face just below the summit. Mills mentions there was some rockfall early on the climb when the sun first hit the face but that ice was hard in the cracks in the upper face...."
The Kelsey guide contains a photo showing the route with the references to the route description, gear list, and other information. 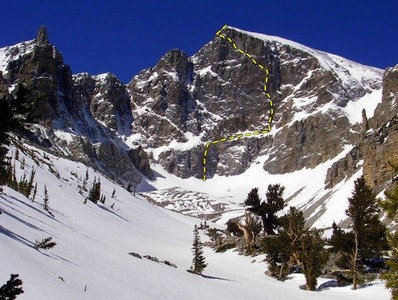 More About Stella by Starlight