Just a bit of poor rock at the top of Pitch 1 and at the start of P2 keeps the "stars" at only 2, otherwise a nice way to get to the clean, white slabs above, and otherwise a 3 star climb for sure. The bad rock and "tree/bush thrashing" of the normal P1 can be totally avoided by climbing any of the variations listed as separate climbs: ("Middle of the Night", "First Knight Returns" or "Grey Ghost", 5.6 to 5.9?) on the clean slab just left of  "A Night Climb for 2 Knights..."....it is highly recommended to START there.

APPROACH: From the RR Tracks go up the short rock gully to the main slab (i.e. to the lowest 'toe' of the slab at the start of the Std Route; same as the winter climb Cinema Gully) then up RIGHT along the base passing starts of Time Traveler and Across-the-Universe. Continue upwards close to the base of the slab for another 40-50 ft or so, (very steep dirt) then slab right through the woods 50-75 ft to the next low angle, easy slab. [photo 1] Start here, about 1/2 way up the slab at a 6-8" maple tree. (FA party probably started lower, as their P1 length is given as 150 ft)

P1- [Var./Alt] 100 ft 5.2-5.4  Diagonal easily up the slab to cross it, then either up through the bushes, trees and dirt,...or up the very poor rock just to the left of the same. In 2007, when confronted with a mossy wall, I climbed up on a 'nose-like" feature to the right, but in 2015 noted this had fallen off and left shattered yellow rock!, I stepped gingerly across to the right, then up. Belay in trees at the base of the dark rock. The letters "S T" are scratched/engraved(?) into the rock. [photo]

Variation/Alternate: Much cleaner and more solid rock is found on any of the slab variations to P1 of A Night Climb for Two Knights".  If chosing this alternative, a better approach is as follows:

Direct Approach to the "Night Climb" slab: Hike up from Hattie's Garden parking to the RR tracks. Look for a small cairn about 150 RR-ties "up-notch" of the "Cinema" gully, then follow cairns steeply up, keeping generally to the right side of the wide gully, to a horizontal dirt ledge just right of the "toe" of the slab that is Pitch1 of Star Trek. Move right 25-30 ft and then follow a zig-zag path up on steep ground, finally cutting back left and up to a small flattish area suitable for roping up. There should be a triple-trunked bitch tree [photo] on the slab to your left, about 20 ft up. If you find yourself directly below a very mossy slab you are too far right. The correct route of approach touches the very bottom left of this slab at a small overlap.

According to all published route descriptions the route "Celestial Path" leaves here, taking a rising traverse right to the next available tree ledge. [See route description submitted by Gunkswest]

P3- 100 ft 5.5-5.6  From the top-of-the-flake belay, move left, clip a new 3/8" bolt ["backed up" by the original 1/4" !] Make a big step back left, then left to start up a sort of dike-like ramp with rounded holds. Excellent rock with reasonable protection behind rounded flakes. Belay at left, at a 2-bolt anchor. ["A Night Climb..." branches off right at this belay.]

P5- Continue up and left along an obvious ramp-like feature. When we climbed the route, at the "end" of this "ramp" we made an easier-than-it-looked slabby move left to gain very easy climbing up a "groove" with rounded holds that led up to the Big Tree Ledge. [although a "P6" might be required] The actual F.A. may have gone straight up a slab just to the right of this feature (which looked to be certain "R/X" territory).

Once moved into the "groove" it was also possible to traverse further left to gain the rap/belay anchors (rap with 2 ropes) at the top of the "Milky Way Pitch" of Across the Universe.

P5a- "Lost in Space" Variation see also separate route description posted by Gunkswest; he has the variation as a 2-pitch Var., starting at the end of his P2 and going all the way to "the tree ledge" in 2 pitches. They would have to be rope-stretchers with 50 m (165ft) ropes. Rapping from the Big Tree ledge to the end of P2 is four 100-ft raps. Even if the tree ledge he speaks of is the "Mid-Slab-tree-ledge" it's 3 x 100 ft raps. Gunkswest indicates P3a has "2 bolts" and goes "to the regular belay", then his P4a heads up a white slab to the tree covered ledge. ]

Here's what we did, I think it's (most of) the 2nd Pitch given by Gunkswest. If his description is correct, there must be a lower pitch that climbs the slab to the left of the regular P3.

Descent: From the big oak tree at the climber's left end of the mid-slab tree ledge, descend as follows with a single 60m rope:

4) From the P2 belay/rap anchor to the tree ledge at the "ST" Take care with this rap, may be some lose rock.  Climbers down first should walk to skier's left on the ledge to get out of the "line of fire".

>>It is possible to rap off one of these trees, near where you land, directly to the base, but it is bushy, dirty, and has much lose rock. Better to Walk to skier's left 25-30 ft, find a rap anchor on a small oak tree.

6) Rap to the ground, below the triple-trunked birch tree of "A Night Climb"

From the RR Tracks go up the short rock gully to the main slab (i.e. to the lowest 'toe' of the slab at the start of the Std Route; same as the winter climb Cinema Gully) then up RIGHT along the base passing starts of Time Traveler and Across-the-Universe and up close to the base of the slab for another 50 ft or so, then slab right through the woods 40-50 ft to the low angle, easy slab. [photo 1] Start here, about 1/2 way up the slab at a 6-8" maple tree.

There is supposed to be a slabby lower start, down and off to the right (facing uphill). One attempt to find it by this climber resulted in two back-offs from quite low; although muddy/slimy shoes may have contributed to this! One of these two attempts had been optimistically labeled "Alt. Slab Start" on one of the photos.

P1 is quite lose and extremely dirty at the top. A much better start to the climb is the slab just left of the climb "A Night Climb for Two Knights". This has its own approach. See that climb. 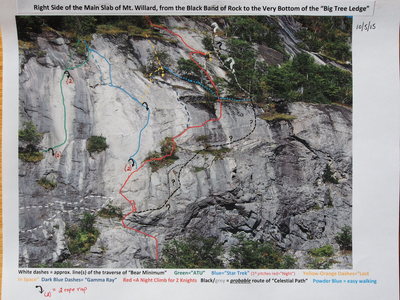 Upper Right side of Slab- "Star Trek" in Red an… 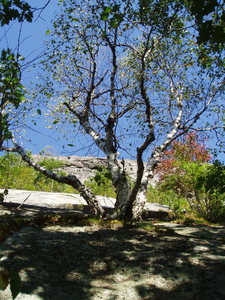 Triple-Trunked birch on a ledge 10ft up marks t… 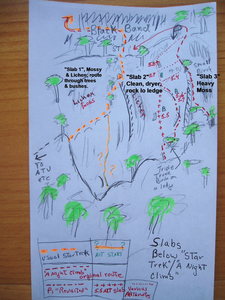 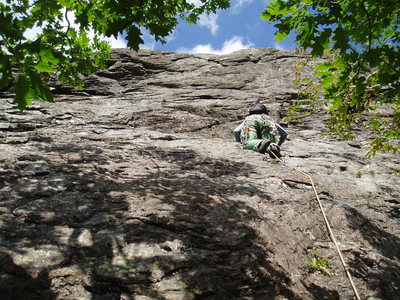 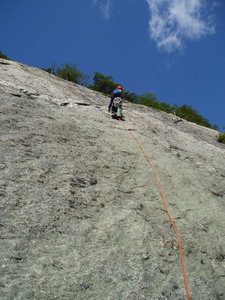 Looking up at P4. The leader has just reached t… 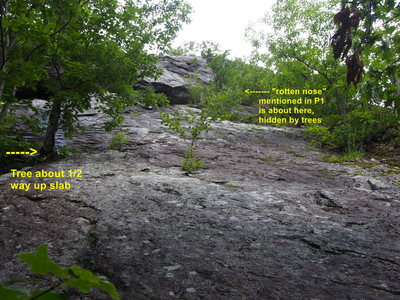 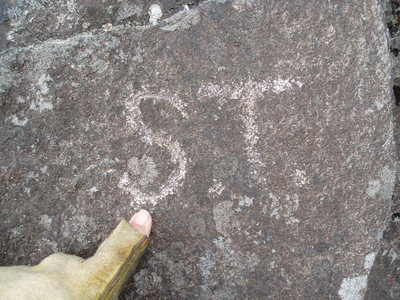 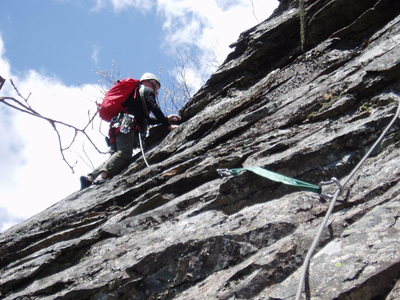 JS at the "nose" at the end of the traverse on…

More About Star Trek and the "Lost in Space" 5.7+R Variant ?