Classic hard line straight up the monkey. Most recently, Adam Ondra onsighted it (2018), and as far as I know Paige Claassen has the only female ascent from 2014.

Ryan Palo describes it in an interview post-send from 2012:

"The route breaks down into two parts. The first section in the white rock is a low angle 5.13d. Just the first six bolts could be considered a 5.13c, then there are some deadpoints to small edges and pockets. It's really off balance and technical."

It then goes "into a 5.12+ section where the rock color changes to purple. Then it gets ruckus with big leaps on slopey holds. There is probably a six move V9 on half pad edges as it gets steeper. Then there's a really hard traverse with blind moves into the final boulder sequence. Going to the last bolt, I was taking 50-footers and clearing the purple rock, landing way down in the white stone."

Smith Rock, Monkey Face. The route is on the east side of the Monkey Face tower, pretty hard to miss. 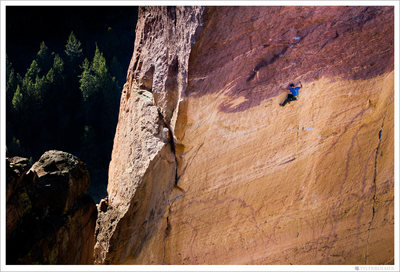 Jonathan Siegrist on Just Do It

More About Just Do It