Grunge Couloir is a steep snow chute on the NE end of Timpanogos. It's a great, direct way to reach the north summit of Timp and more aesthetic than it's neighbor, the Cold Fusion Couloir.

The couloir is sustained in the 40-50 degree range with a short crux near the top that supposedly reaches 62 degrees.

A helmet is definitely necessary as the couloir is known to spew rocks (typically a large runnel can be seen running down the center of the chute), so keep your ears and eyes open.

As of May of 2014 there are two rap stations in the couloir, presumably used for ski descents. One is about mid-way up, the other at the top just above the cornices.

As with any snow climb, make sure you're checking snow conditions before committing to the couloir, which would be a death trap if it slid with you in it.

There are a few descent possibilities. You can descend the NW ridge down to a dirt road and hike it in back to your car, or, as a friend of mine has noted, you can simply glissade down Cold Fusion Couloir (assuming it has snow in it) which took him a reported 20 min. OR, you can treat yourself to an amazing day and continue along the summit ridge to tag the main summit (bonus points for ticking the south summit as well!).

Reach the couloir via the Timpooneke trailhead in American Fork Canyon. Head up into the Wooly Hole Cirque and contour to to the right and up a broad face to reach the couloir which is split into two forks.

I've heard reports that ice can form in the couloir. My partner and I took one technical ice tool and a mountaineering ax, though we didn't end up using the ice tool. With firmer snow than we had, or if ice is encountered, I could see a tool coming in very handy. Crampons a must. 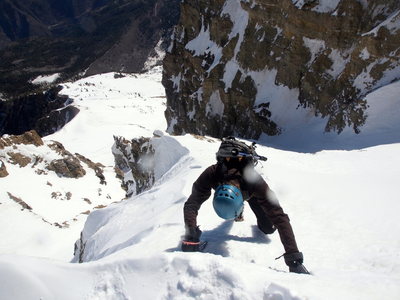 Steepest section of the couloir, near the summi… 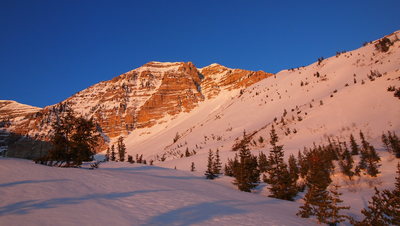 Grunge Couloir is on the right end of the mount…

Entering the couloir via the (climber's) right…

Looking down the couloir. 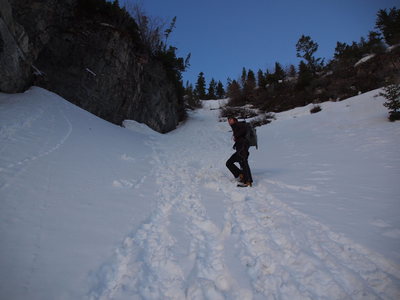 Getting into Woolly Hole Cirque.