Routes in The Bungalow

This route climbs the leftmost side of the Lower Bungalow Wall. Start on the flat portion of the descent gully and step onto the face via a small ledge/stance. Traverse right to the first bolt, then head up the flake. After the second bolt head left and then up to the anchors, clipping two more bolts along the way.

Approach the Lower Bungalow Wall via one of two options:

 The regular approach follows the approach directions for the Upper Bungalow Wall and then makes use of a fixed rope to descend the gully below Rusty's Staircase. The fixed rope is located towards the highway from the wall at the bottom of the downclimb.

 The lower approach is accessed via the old highway that runs from the base of the Iron Curtain Wall and ends after the Bungalow Wall. Walk up canyon past the Riptide Wall, past some scree piles, until you are almost at the Bungalow Wall. A faint trail heading up and right will take you to the Lower Bungalow Wall. Be wary not to grab loose rock as you reach the wall, the rock is actively exfoliating.

NOTE: The routes at the Lower Bungalow Wall should NOT be considered top accessible--the hill above is eroding, with much loose rock to kick down on someone below or to slip on.

5 bolts plus two anchor bolts. The fixed rope in the gully can be used for a belay anchor. A shovel or two on your harness adds style points!

EDIT: A new bolt by the FA party has been added since the route was put up, making the beginning more reasonable. 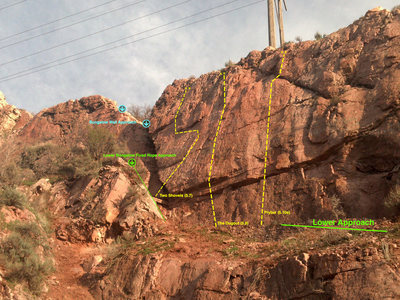