Babies in the House

In early October 2013, the United States federal government shutdown when the house and senate of Congress could not reach an agreement on the federal budget. This shutdown allowed many federal workers extra time to climb. This route was established in the midst of the silliness.

Start up the corner clipping bolts on the left in fantastic water-polished rock. Move left onto the face at the third bolt into some neat features, including a tufa-like rail, to the anchors.

The route can be climbed right of the bolt line most of the way but will result in some hard clips and less enjoyable climbing.

Just left of the corner above a rock wall belay platform

6 bolts to chains with biners 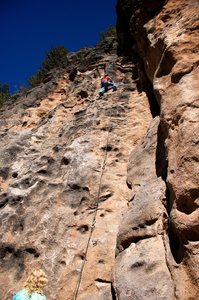 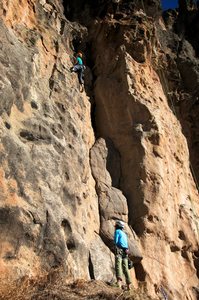 More About Babies in the House