Traffic from drug smuggling and illegal immigration is high in this area. Exercise caution. US Border Patrol recommends avoiding this area completely after dark.

This is the classic Forbes (Forbes-Montoya) route, as climbed in 1898 by Dr. Robert Humphrey Forbes, a professor of agriculture at the University of Arizona, and Lorenzo Montoya, after five attempts to reach the summit of Baboquivari. The climb consists of three easy roped pitches with scrambling in between.

From the saddle of Thomas Canyon, head southwest up to the prominent notch.

Pitch 1: 40 ft. This pitch ascends the chimney with a chockstone. Protection is sparse, but the climbing is not difficult. There are two belay bolts at the top. From the top, hike along the rock wall on your left to the south about 100 yards to a nice west-facing slab.

Pitch 2: 150 ft. Climb the slab directly following the meager crack. The crack will take some small to medium cams, and nuts. The climbing is easy and a bit runout near the top. Belay at the two belay bolts.

From the second pitch belay, hike right (south) and bushwhack through an oak forest for about 100 feet to get to the base of the third pitch.

Pitch 3: 120 ft; 5.4. This is the famous Ladder Pitch. In the 1930s, the CCC installed a ladder at this pitch, as well as stairs at the Great Ramp on the west face to facilitate easy access to an observation tower at the summit. The ladder, stairs, and tower have long since been dismantled, but remnants of rusted steel and wood remain strewn throughout the route. The Ladder Pitch doesn’t protect well, although it is low 5th class. There is a pair of new-ish bolts halfway through the pitch and a pair of new bolts with chains at the top of the pitch, next to the tree that was previously used as the belay/rappel anchor. Belay from these bolts.

From the top of the Ladder Pitch, head right (west). Climb a short chimney with a chockstone, entering a gully with scree and light vegetation. Turn left at the gully, following the gully up toward the summit. As the gully system weakens and opens up, stay close to the wall on your right and continue the scramble to the summit.

For descent, carefully retrace your steps and rappel all three pitches. Be careful when you are routefinding on the way down. It is easy to descend into the wrong gully when leaving the summit. The oaks can hide the edges of the cliffs. These gullies invariably end at sheer cliff edges.

From Tucson, drive west on Highway 86 (Ajo Way) to Three Points (Robles Junction) and head south on Highway 286. Head south for 30 miles and take the first right after milepost 16. Stay on the dirt road for 2.7 miles, and take the first dirt road that forks right. This road heads through some washes and may require a 4-wheel or high clearance vehicle depending on the season. The road eventually ends at a gate with a sign directing you to the trailhead. Follow the trail for about 90 minutes to the saddle. The trail can be hard to follow at times, so if you think you are lost, backtrack a bit and keep your eye peeled for cairns.

A single set of finger, hand and fist sized cams or tricams (e.g. a set of Camelots in .2 to #3 sizes), and four to six shoulder-length slings, for slinging horns and building anchors at bolts.

This can be climbed easily in approach shoes, if you're a reasonably strong climber and, say, rock is dry. 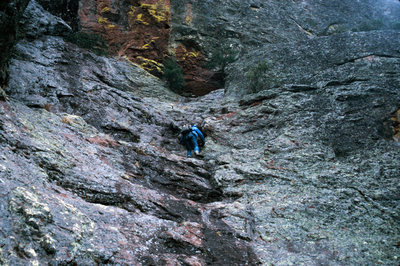 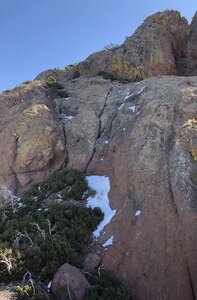 P2 ascends on or near the long water course in… 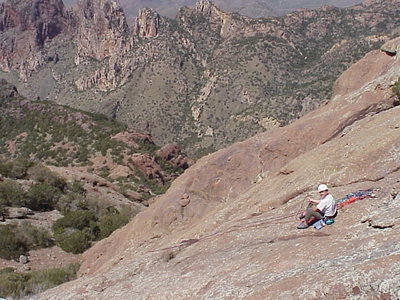 Belaying at the top of the slab on pitch2.