This is a fun smear near Jaws. I do not know if this route comes into condition often or if it's been climbed. No anchors were found on the logical tree at the top, and we saw no signs of prior passage.

Start up a 20 foot corner either climbing ice on a step that slabs out, or staying in a corner/chimney using rock. There is good gear with stoppers and finger-size cams.

After the initial 20 foot step, the route continues up a thin slab for another 30 feet. In the conditions we found it, the bottom was not protectable, but before it kicked back up to vertical, you could place stubbies in the top half. Because the smear was leaner down low, we climbed the corner a few body lengths, finding good edges and pick constrictions. We also found no gear, so then we traversed left to surmount the smear where the ice became thicker. Conditions will dictate the route up to this point. The corner was iced, but it looked like if it was dry you might get a 5 inch piece to place at one point. It was too icy to place a cam when we did it.

After the slab kicks back up to vertical, the ice took 17 cm screws for the remainder on our ascent. The remainder of the route consists of two vertical steps, each about 20-30 feet, set aesthetically in a constricted corner.

At the top, find a sling on a large juniper from which to lower. We were just barely able to reach with a 70m. Be very careful, a 60m would not make it.

This route is located higher on the cliff band about 200 meters left of Jaws. Approach up a third class ledge system. It is advisable to anchor the belay.

10cm - 17 cm screws, TCUs to fingers, small selection of stoppers. There is a solid juniper for lowering at the top. 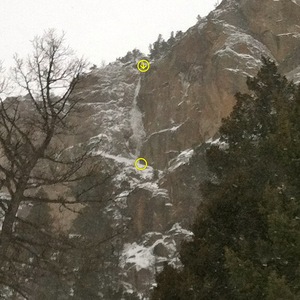 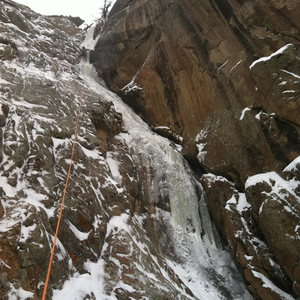 Climber can be seen in top section. 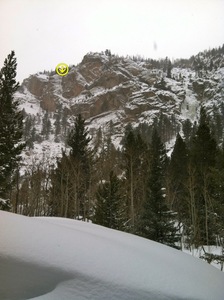 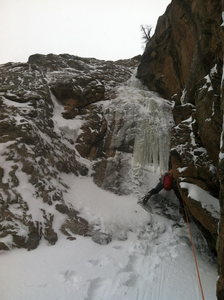 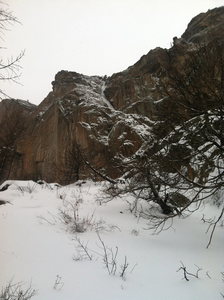 Route from directly below before ascending 3rd…