This is a really great route and deserves to be climbed. Conisder it to be a harder version of Birdbrain; it's certainly every bit as good and has better rock.

A bit of history: Jared Vilhauer and Chris Nance first climbed this route in 2006. They did turn around at dusk with 100 feet or so of WI 3 between them and the true top of the route. They marked their high point as the circle in the ice flow shown on the beta photo. Due to access issues, they did not report it. Josh Wharton and I thought this route was unclimbed and ascended to the top of the ice on 1/15/14 in about 6 hours of climbing time. While it wasn't as difficult as we expected it to be, it is a great route, and we both agree that it deserves to be climbed often.

Here is the description for the route written by S. House, explaining the House/Wharton start:

P1: Start climbing the big chimney that is on the left side of the pedestal that sits on the base of the climb. Once the leader runs out of rope, the second can climb easy snow for another 50-60 feet in the chimney to allow the leader to get to a belay in the rock at the top of the big snow band that caps the pedestal.

P2: Climb up and right to gain easier ground that takes you up and left. Seek the terrain that will lead your party into the shallow chimney that funnels some of the ice down from the flow above. Belay at the are of this chimney.

Nance/Vilhauer start: (from Jared Valhauer):
"Chris and I started to the right of the triangular rock at the base and climbed corners and chimneys up to where the ice started. I remember these three pitches having some REALLY fun climbing but also having some super loose/ runout sections, nothing worse than your typical San Juan adventure climb though, with nothing harder than 5.8."

P 3: The Quartz Dike pitch. This is a typical, and very good, San Juan's M6 trad mixed pitch. Hunt for gear and don't fall off. It is never difficult and sometimes dangerous. Move right or left as needed to find the easiest terrain, but stick to the line. There is a cool white quartz dike through most of this pitch an you'll find more and more ice the higher you climb. Belay after 55+ meters the left side of a large snowy, slopey ledge. There are two fixed pins and fixed nut there.

P4: Climb the thin, delicate ice without breaking it exiting onto a very easy snow gully. Belay in a crack on the right side of the snow gully as high as is comfortable so you don't get hit by ice from the next lead.

P5 and 6: Follow the ice upwards. There is a tree with a sling and a biner on it.

Descent: Rap the route using the top tree, v-threads, and fixed nuts/pitons. If you rap the House-Wharton line, you use a 2-bolt anchor about 40 meters above the ground as your last rap. You'll see this anchor as you climb the first pitch, but you won't want to climb over to it on the ascent.

JW and I skied to the base of Bridalveil, continued to the base of Sapphire Bullets, and then descended slightly (all on skis) to stay in the protection of the trees until we were on the wind-scoured gravel rib below the route. It would be prudent to have avalanche safety gear for the approach and to choose your snow-conditions carefully. It took Josh and I 2 hours to approach.

JW and I brought 1.5 x set of cams, a full set of nuts including some small steel nuts or brassies, 4-5 pins, and 7 screws. For us, this was too much gear. A single set of cams plus the rest of the rock gear would be fine. The actual ice climbing is either thin (not much pro) or easy (no need for much pro), so 7 screws was too many. 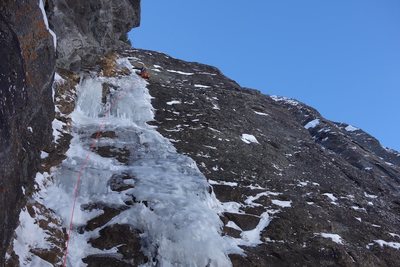 SH leading P4. This section was the most delica… 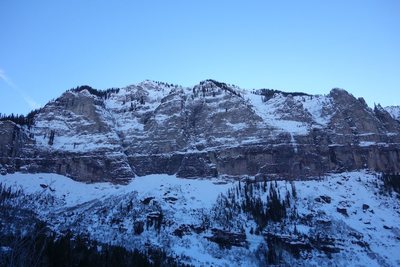 True G.R.I.T. is right in the center of this ph… 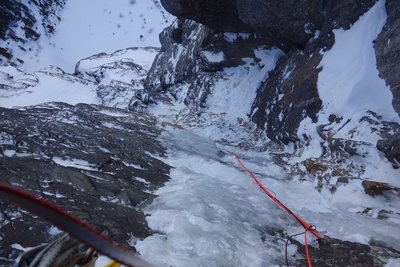 A view down from mid-way on P4. The belay is vi… 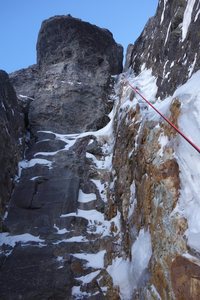 A view of the upper half of P4 while on rappel. 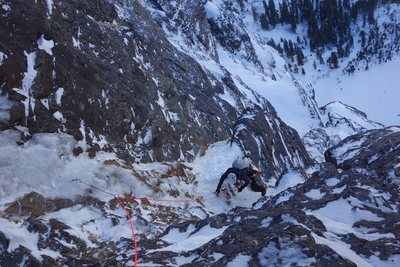 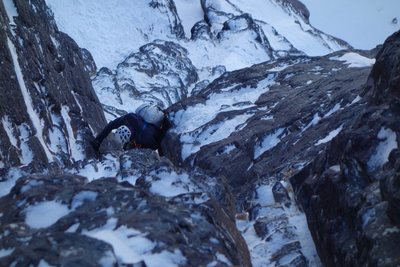 Exiting the Quartz Chimney of pitch 3. The hard… 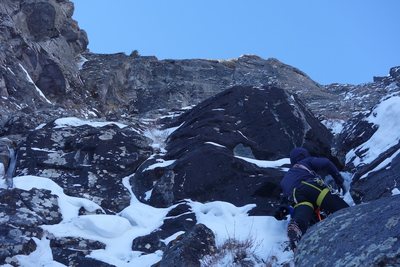 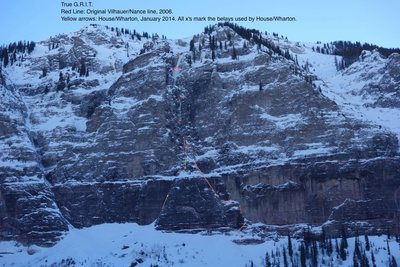