One of the easier routes on the main face, but don't let it fool you. This one makes you work for it, wishing the next bolt was just a little closer. While the bolts are well spaced, it is by no means a dangerous route, despite what your butt may be telling you.

There is a direct start that comes in from the left with two bolts and one finger sized piece of gear. It is a stout variation, but preferred if you don't have the #6 camalot or don't like offwidths. Getting off the ground is tricky and spicy. The spiciness ends after you clip the first bolt, but the rest of the climbing is thin and sustained. It was suggested that it was 11b, but I would call it closer to 11c/d.

Start at the obvious left-facing offwidth corner. This corner often runs, but can be aided. Power up the corner and onto the face above. You will reach a slabby ledge with a horizontal crack that runs across it and up the right eventually turning into a vertical crack. It is imperative that you belay here on the horizontal. P2, step up and left trending to the first bolt. Once at the first bolt the wall becomes thin and technical crystals and knobs. Enjoy the wild ride to the crux just below a steep bulge. Get past this and get psyched for the final crux of a sustained smear fest. Once past here, enjoy the easy but runout romp straight up in a brown water groove with big holds. Step left to get to the anchors just to the right of a large water streak. There is small gear out right here as a directional to protect your second from a potential swing after unclipping the last bolt.

A #6 camalot is mandatory! Nothing smaller will protect the opening sequence, which is difficult and sustained. Bring mostly small gear from .5 and below. A few QD's for the bolts and some long runners to keep things smooth. All hardware is updated and SS. A two-bolt anchor at the top. Rappel straight down it's neighboring route Squeelin' Feelin', just next to the water streak to reach the second set of anchors. 2 60m ropes will get you down. 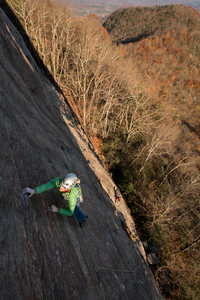 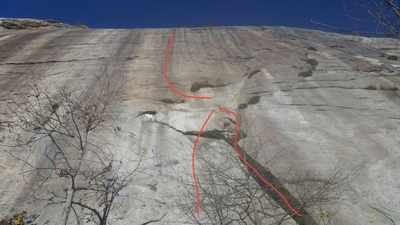 The normal wide flake start (right) and the 11b… 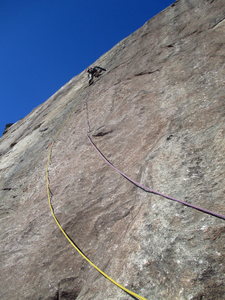 The second pitch of Peelin' Feelin', with surpr… 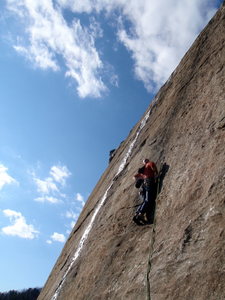 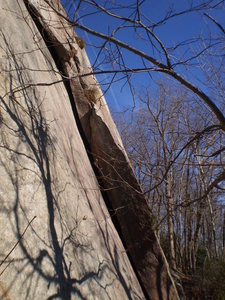